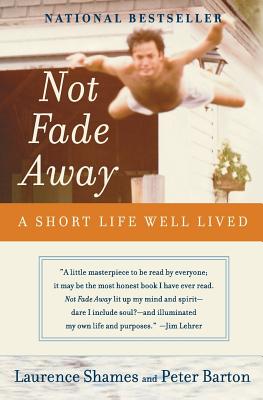 Not Fade Away: A Short Life Well Lived (Paperback)

Some people are born to lead and destined to teach by the example of living life to the fullest, and facing death with uncommon honesty and courage. Peter Barton was that kind of person.

Driven by the ideals that sparked a generation, he became an overachieving Everyman, a risk-taker who showed others what was possible. Then, in the prime of his life—hugely successful, happily married, and the father of three children—Peter faced the greatest of all challenges. Diagnosed with cancer, he began a journey that was not only frightening and appalling but also full of wonder and discovery.

With unflinching candor and even surprising humor, Not Fade Away finds meaning and solace in Peter's confrontation with mortality. Celebrating life as it dares to stare down death, Peter's story addresses universal hopes and fears, and redefines the quietly heroic tasks of seeking clarity in the midst of pain, of breaking through to personal faith, and of achieving peace after bold and sincere questioning.

Laurence Shames, formerly the Ethics columnist for Esquire, is a critically acclaimed novelist and essayist, and was the ghostwriter of The New York Times bestseller Boss of Bosses. He lives in Ojai, California.

Peter Barton was a founder and CEO of Liberty Media and a passionate advocate for such innovative programming as the Discovery Channel, Fox Sports Net, Black Entertainment Television, and QVC. After leaving Liberty in 1997, he devoted himself to philanthropy and education. He taught a graduate business course in entrepreneurship at the University of Denver and founded the nonprofit Privacy Foundation. He died in September 2002.