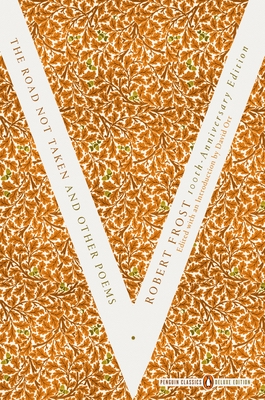 The Road Not Taken and Other Poems: (Penguin Classics Deluxe Edition) (Paperback)


On Our Shelves Now
Frost’s early poems, selected by poet David Orr for the centennial of “The Road Not Taken”

For one hundred years, Robert Frost’s “The Road Not Taken” has enchanted and challenged readers with its deceptively simple premise—a person reaches a fork in the road, facing a choice full of doubt and possibility. The Road Not Taken and Other Poems presents Frost’s best-loved poem along with other works from his brilliant early years, including such poems as “After Apple-Picking,” “The Oven Bird,” and “Mending Wall.” Award-winning poet and critic David Orr’s introduction discusses why Frost remains so central (if often misunderstood) in American culture and how the beautiful intricacy of his poetry keeps inviting generation after generation to search for meaning in his work.

For more than sixty-five years, Penguin has been the leading publisher of classic literature in the English-speaking world. With more than 1,500 titles, Penguin Classics represents a global bookshelf of the best works throughout history and across genres and disciplines. Readers trust the series to provide authoritative texts enhanced by introductions and notes by distinguished scholars and contemporary authors, as well as up-to-date translations by award-winning translators.
Robert Frost (1874–1963) was one of the most celebrated American poets of the twentieth century. He was awarded four Pulitzer Prizes and the Congressional Gold Medal for his poetry.

David Orr is the poetry columnist for the New York Times Book Review. He is the winner of the Nona Balakian Prize from the National Book Critics Circle and his writing has appeared in the New Yorker, Poetry, Slate, and the Yale Review.