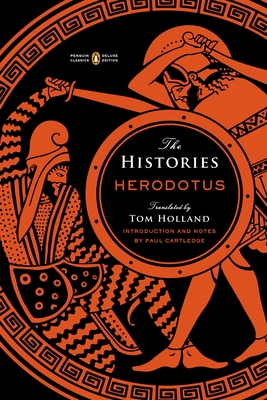 
On Our Shelves Now
“Unquestionably the best English translation of Herodotus to have appeared in the past half-century.” —The Times Literary Supplement

In Tom Holland’s vibrant translation, one of the great masterpieces of Western history springs to life. Herodotus of Halicarnassus—hailed by Cicero as the “Father of History”—composed his histories around 440 BC. The earliest surviving work of nonfiction, The Histories works its way from the Trojan War through an epic account of the war between the Persian empire and the Greek city-states in the fifth century BC, recording landmark events that ensured the development of Western culture and still capture our modern imagination. Beautifully packaged in a Penguin Classics Deluxe edition with a comprehensive array of tools to guide first-time readers and experts alike, this accessible translation makes Herodotus fresh and irresistible once more.

For more than seventy years, Penguin has been the leading publisher of classic literature in the English-speaking world. With more than 1,700 titles, Penguin Classics represents a global bookshelf of the best works throughout history and across genres and disciplines. Readers trust the series to provide authoritative texts enhanced by introductions and notes by distinguished scholars and contemporary authors, as well as up-to-date translations by award-winning translators.
HERODOTUS was born around 480 bc in Halicarnassus, on the southwest coast of Asia Minor. Few facts are known about his life but he remains known through his life’s work, The Histories.

TOM HOLLAND is the award-winning author of Rubicon, Persian Fire, and most recently In the Shadow of the Sword. He lives in London.

PAUL CARTLEDGE is the author of Sparta and Lakonia and The Greeks. He is A. G. Leventis Professor of Greek Culture at the University of Cambridge.
“Unquestionably the best English translation of Herodotus to have appeared in the past half-century…I am in awe of Tom Holland’s achievement, and have no doubt it will bear rich fruit in bringing Herodotus to public attention”
–Edith Hall, Times Literary Supplement

“Lively, engaging version of the Histories…[an] admirable translation”
–The Economist

"An engaging modern translation...A feast for students of ancient history and budding historians of any period."
–Kirkus (starred review)

"Tom Holland’s vivid, vigorous new translation [is] an accomplishment that makes Herodotus sound like a contemporary bending our ear, celebrating great and wondrous deeds of the past to prevent their memory from fading.”
–Wichita Eagle

"Holland’s book is a performance of its own, full of gusto and flair, and in that way it beats its predecessors: this is Herodotus the pubman, taking your elbow to tell you stories about the dastardly yet fascinating tyrants of the Near East and the miraculous fables attending them."
–Quarterly Conversation

"Brisk, modern and idiomatic, gives greater weight to accuracy, with only an occasional loss of fluency...Holland and Cartledge deserve high praise for bringing a bristling new Herodotus to a new generation."
–The Spectator

"[Holland], like Herodotus, is a storyteller par excellence...The maps and glossary index are excellent and the introduction and accompanying historical notes to the translation [are] admirably to the point."
–The New Statesman