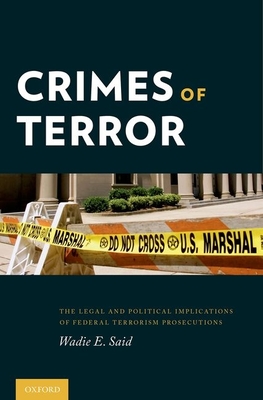 Crimes of Terror: The Legal and Political Implications of Federal Terrorism Prosecutions (Hardcover)


Usually Ships in 1-5 Days
The U.S. government's power to categorize individuals as terrorist suspects and therefore ineligible for certain long-standing constitutional protections has expanded exponentially since 9/11, all the while remaining resistant to oversight. Crimes of Terror: The Legal and Political Implications of Federal Terrorism Prosecutions provides a comprehensive and uniquely up-to-date dissection of the government's advantages over suspects in criminal prosecutions of terrorism, which are driven by a preventive mindset that purports to stop plots before they can come to fruition. It establishes the background for these controversial policies and practices and then demonstrates how they have impeded the normal goals of criminal prosecution, even in light of a competing military tribunal model. Proceeding in a linear manner from the investigatory stage of a prosecution on through to sentencing, the book documents the emergence of a "terrorist exceptionalism" to normal rules of criminal law
and procedure and questions whether the government has overstated the threat posed by the individuals it charges with these crimes. Included is a discussion of the large-scale spying and use of informants rooted in the questionable "radicalization" theory; the material support statute--the government's chief legal tool in bringing criminal prosecutions; the new rules regarding generation of evidence and the broad construction of that evidence as relevant at trial; and a look at the special sentencing and confinement regimes for those convicted of terrorist crimes. In this critical examination of terrorism prosecutions in federal court, Professor Said reveals a phenomenon at odds with basic constitutional protections for criminal defendants.

Wadie E. Said is Professor of Law at the University of South Carolina School of Law, where he teaches criminal law, criminal procedure, and human rights law. His scholarship has appeared in the Ohio State Law Journal, Brigham Young University Law Review, the Indiana Law Journal, the Washington Law Review, and the Columbia Human Rights Law Review. Before joining the South Carolina faculty, he represented terrorist suspects as an assistant federal public defender in Tampa, Florida, serving as counsel in United States v. al-Arian, one of the largest terrorism prosecutions in American history. A graduate of Princeton University and Columbia Law School, he clerked for Chief Judge Charles P. Sifton of the U.S. District Court for the Eastern District of New York.