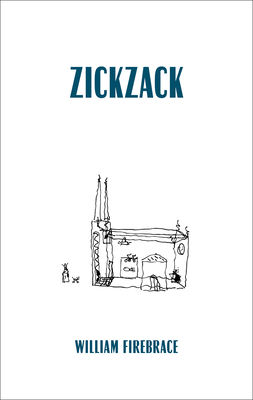 
Coming Soon - Available for Pre-Order Now
Zigzagging through six locations on the edges of the German-speaking world, exploring them through politics, architecture, literature, film, art, music, food, and history.

“Zickzack” is the German word for “zigzag”: hopping around, moving back and forth, never following a straight line, avoiding the monotony of one thing following another. Zickzack is William Firebrace’s zigzagging exploration of six places on the edges of the German-speaking world. Deploying essays, narration, conversations, descriptions, and lists, Firebrace celebrates locations on defined and undefined borders, where cultures, languages, and histories mix. In his nonlinear wandering, he touches on ethnicity, topography, history, film, literature, myth, languages, and gastronomy.

These locales are not the famous cities of Berlin, Vienna, and Zurich, but areas that straddle countries, geographies, and influences. Two are within Germany itself, one lies on (and over) the border with Poland, and three were once within the loose German cultural zone but now belong to other countries. Firebrace explores Strasbourg, capital of Alsace and part of a long-running territorial dispute between France and Germany; Königsberg, which spent some of the twentieth century as Kaliningrad; and Görlitz and Zgorcelec, twin cities on either side of a river. He plays hopscotch with churches in Backstein and takes a train trip past cities with double names—Sterzing-Vipiteno, Brixen-Bressanone, Klausen-Chiusa, signs of the double culture, where everything happens twice but in a slightly different way. In the zigzags of the German-speaking world, the original culture sometimes survives, sometimes is deliberately destroyed, sometimes merges with other cultures, and often, if submerged, resurfaces in a different form.
William Firebrace is an architect and writer in London. He is the author of Marseille Mix and Memo for Nemo.