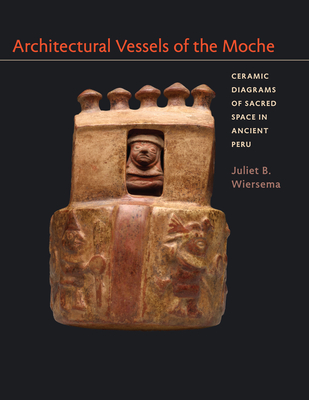 By Juliet B. Wiersema

Elaborately decorated monumental architecture, royal tombs, and ritual human sacrifice have established the Moche of ancient Peru (AD 200–800) as a culturally rich and ideologically complex civilization. Because the Moche did not have a text-based writing system, their sophisticated works of art, which communicated complex concepts, specific ideas, and detailed narratives, have become a prime source for understanding the Moche worldview. This pioneering volume presents the first book-length study of one of the most compelling forms of Moche art—fine ware ceramics that depict architectural structures in miniature.

Assembling a data set of some two hundred objects, Architectural Vessels of the Moche interprets the form and symbolism of these artworks and their relationship to full-scale excavated Moche architectural remains. Juliet B. Wiersema reveals that Moche architectural vessels preserve aspects of Moche monumental architecture that have been irreparably compromised by centuries of treasure hunting, erosion, and cataclysmic events, while they also present schematic diagrams of specific and identifiable structures found within Moche sacred precincts. She demonstrates that many architectural vessels were also acoustic artifacts, indicating that the Moche considered certain architectural forms to be vocal, or animate. This research offers an important new perspective on ancient architectural representation and depicted space in the pre-Hispanic Americas and also complements existing studies of architectural models made by Old World cultures, including Middle Kingdom Egypt and Han Dynasty China.

Juliet B. Wiersema is Assistant Professor of Pre-Hispanic and Spanish Colonial Art the University of Texas at San Antonio. She has also taught at Santa Clara University and the University of Maryland. Wiersema served as Assistant Curator of the Art of the Americas at the Brooklyn Museum of Art; conducted World War II provenance research for the Fine Arts Museums of San Francisco; developed content for the Visionary Art Museums’ Off the Map, an interactive guide to global visionary art; and has undertaken radiography and acoustical studies of ceramic whistling vessels with conservators and ethnomusicologists at the Smithsonian Institution’s National Museum of the American Indian and the Museo Nacional de Antropología, Arquelogía, e Historia del Peru. She has been awarded research fellowships through U.S. Fulbright, the Smithsonian Institution, the Library of Congress, and the Metropolitan Museum of Art.