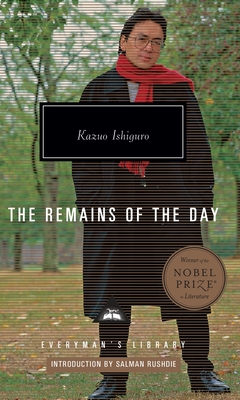 
Usually Ships in 1-5 Days
From the Nobel Prize–winning author, here is an elegant Everyman's Library hardcover edition of the universally acclaimed novel—winner of the Booker Prize, a bestseller, and the basis for an award-winning film—with full-cloth binding, a silk ribbon marker, a chronology, and an introduction by Salman Rushdie.

Here is Kazuo Ishiguro's profoundly compelling portrait of Stevens, the perfect butler, and of his fading, insular world in post-World War II England. Stevens, at the end of three decades of service at Darlington Hall, spending a day on a country drive, embarks as well on a journey through the past in an effort to reassure himself that he has served humanity by serving the "great gentleman," Lord Darlington. But lurking in his memory are doubts about the true nature of Lord Darlington's "greatness," and much graver doubts about the nature of his own life.
Kazuo Ishiguro is the 2017 winner of the Nobel Prize in Literature. His work has been translated into more than 40 languages. Both The Remains of the Day and Never Let Me Go have sold more than 1 million copies, and both were adapted into highly acclaimed films. Ishiguro's other work includes Nocturnes, A Pale View of the Hills, and An Artist of the Floating World.
WINNER OF THE NOBEL PRIZE IN LITERATURE • WINNER OF THE BOOKER PRIZE

“An intricate and dazzling novel.” —The New York Times

“A virtuoso performance ... put on with dazzling daring and aplomb.” —The New York Review of Books

“A perfect novel. I couldn’t put it down.” —Ann Beattie

“The novel rests firmly on the narrative sophistication and flawless control of tone ... of a most impressive novelist.” —Julian Barnes