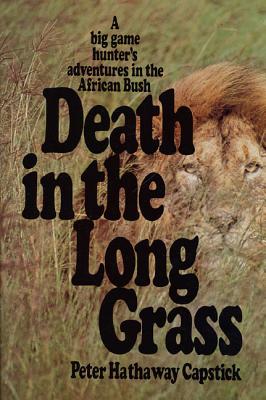 Death in the Long Grass: A Big Game Hunter's Adventures in the African Bush (Hardcover)

As thrilling as any novel, as taut and exciting as any adventure story, Peter Hathaway Capstick’s Death in the Long Grass takes us deep into the heart of darkness to view Africa through the eyes of one of the most renowned professional hunters.

Few men can say they have known Africa as Capstick has known it—leading safaris through lion country; tracking man-eating leopards along tangled jungle paths; running for cover as fear-maddened elephants stampede in all directions. And of the few who have known this dangerous way of life, fewer still can recount their adventures with the flair of this former professional hunter-turned-writer.

Based on Capstick’s own experiences and the personal accounts of his colleagues, Death in the Long Grass portrays the great killers of the African bush—not only the lion, leopard, and elephant, but the primitive rhino and the crocodile waiting for its unsuspecting prey, the titanic hippo and the Cape buffalo charging like an express train out of control. Capstick was a born raconteur whose colorful descriptions and eye for exciting, authentic detail bring us face to face with some of the most ferocious killers in the world—underrated killers like the surprisingly brave and cunning hyena, silent killers such as the lightning-fast black mamba snake, collective killers like the wild dog.

Readers can lean back in a chair, sip a tall, iced drink, and revel in the kinds of hunting stories Hemingway and Ruark used to hear in hotel bars from Nairobi to Johannesburg, as veteran hunters would tell of what they heard beyond the campfire and saw through the sights of an express rifle.

Peter Hathaway Capstick (1940-1996), a former Wall Street stockbroker turned professional adventurer, was critically acclaimed as the successor to Hemingway and Ruark in African hunting literature. After giving up his career, the New Jersey native hunted in Central and South America before going to Africa in 1968, where he held professional hunting licenses in Ethiopia, Zambia, Botswana, and Rhodesia (now Zimbabwe). Capstick also served in that most perilous of trades—Elephant and Buffalo Cropping Officer. In addition to writing about hunting, he was also featured in an award-winning safari video and audio tapes.
Captstick settled in Pretoria, South Africa with his wife Fiona until his death at age 56.

“Peter Hathaway Capstick's 'Death in the Long Grass' continues to be one of the true classics of written hunting tales. I just read it again, and loved it just as much as when it was first published in the late 1970s.” —The Wichita Eagle