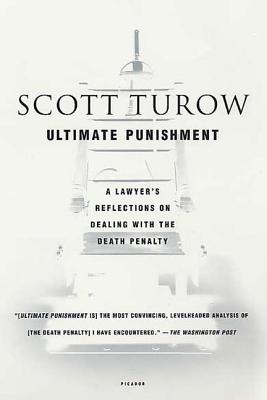 Ultimate Punishment: A Lawyer's Reflections on Dealing with the Death Penalty (Paperback)

A gripping examination of the case for and against capital punishment by a respected criminal lawyer and celebrated novelist.

In the words of Harvard Law Professor, Laurence H. Tribe--"Ultimate Punishment is the ultimate statement about the death penalty: to read it is to understand why law alone cannot make us whole."

As a respected criminal lawyer, Scott Turow has been involved with the death penalty for more than a decade, including successfully representing two different men convicted in death-penalty prosecutions. In this vivid account of how his views on the death penalty have evolved, Turow describes his own experiences with capital punishment from his days as an impassioned young prosecutor to his recent service on the Illinois commission which investigated the administration of the death penalty and influenced Governor George Ryan's unprecedented commutation of the sentences of 164 death row inmates on his last day in office.

Telling the powerful stories behind the statistics, as he moves from the Governor's Mansion to Illinois's state-of-the art "super-max" prison and the execution chamber, Ultimate Punishment has all the drama and intellectual substance of Turow's bestselling fiction.

Scott Turow is the author of worldwide bestselling novels including Presumed Innocent, Innocent, Ordinary Heroes, The Burden of Proof, Reversible Errors and Limitations. His works of nonfiction include One L, his journal from his first year at law school, and Ultimate Punishment, which he wrote after serving on the Illinois commission that investigated the administration of the death penalty and influenced Governor George Ryan’s unprecedented commutation of the sentences of 164 death row inmates on his last day in office. Ultimate Punishment won the Robert F. Kennedy Book Award. He lives outside Chicago, where he is partner in the firm of SNR Denton (formerly Sonnenschein, Nath & Rosenthal).

“This slender but closely argued book is an account of Turow's path to a 'no' vote on capital punishment....As one who has long wrestled with this issue, and who as an editorialist many years ago from time to time had to do that wrestling in public, I regard this as the most convincing, levelheaded analysis of it I have encountered.” —The Washington Post

“Concise and incisive...As one would expect from a writer of Turow's gifts, Ultimate Punishment makes for compelling and thoughtful reading.” —Chicago Tribune

“Turow's brief narrative illuminates two faces of the death penalty in the United States. Each, as he suggests, should give us serious pause....[Ultimate Punishment is] engaging, and, more important, it speaks to an audience not always considered by death penalty opponents: people, like Turow himself, for whom capital punishment has a strong visceral appeal. Turow does not minimize either the nature of the crimes or the deep anger they evoke in the people forced to reckon with them.” —Los Angeles Times

“By clearly and methodically sorting through the issues regarding the ultimate punishment, Turow has performed a public service. By turns shocking and engrossing, this book is highly recommended.” —Library Journal

“In that rarest of achievements, a page-turner filled with genuine wisdom, Scott Turow takes us with him on a mesmerizing voyage through the land of murder that he has sadly learned to navigate with skill and compassion, allowing us to hear the stories and feel the grief of the survivors who loved and will never see again those whose lives were stolen in acts of ultimate evil, enabling us to share the experiences of accuser and accused alike as they feel their separate ways through the corridors and courtrooms that constitute the elaborate machinery of death, holding us spellbound as we arrive finally at the secret lying at the heart of every one of Turow's gripping novels, a secret whose revelation exposes what we truly seek from capital punishmen and why we will never find it there. Written with a fine lawyey's feel for fairness and with a superb novelist's gift for telling us truths beyond the power of law's logic to express, Ultimate Punishment is the ultimate statement about the death penalty: to read it is to understand why law alone cannot make us whole.” —Laurence H. Tribe, Tyler Professor of Constitutional Law, Harvard Law School