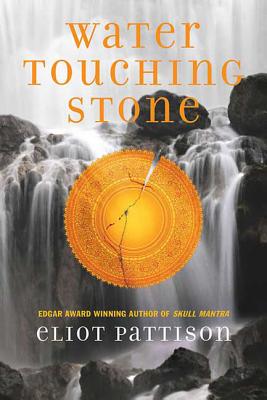 This is book number 2 in the Inspector Shan Tao Yun series.

In Water Touching Stone, the sequel to the internationally acclaimed The Skull Mantra, Shan Tao Yun is cloistered in a remote Tibetan sanctuary when he receives shattering news. A teacher revered by the oppressed has been found slain and, one by one, her orphaned students have followed her to her grave, victims of a killer harboring unfathomable motives. Abandoning his mountain hermitage, Shan Tao Yun, a former Beijing police inspector who has been exiled to Tibet, embarks on a search for justice. Shadowed by bizarre tales of an unleashed 'demon,' Shan braces himself for even darker imaginings as he stalks a killer and fights to restore spiritual balance to the ancient and tenuous splendor of Tibet.

Eliot Pattison is the author of The Skull Mantra, which won the Edgar Award and was a finalist for the Gold Dagger, as well Water Touching Stone and Bone Mountain. Pattison is a world traveler and frequent visitor to China, and his numerous books and articles on international policy issues have been published around the world.

“Few mystery sequels have been awaited with as much anticipation as this one.” —Publishers Weekly

“Water Touching Stone is a mystery but it is more than just a who-done-it...another triumph for fans of the Edgar Award-winning author.” —The Midwest Book Review