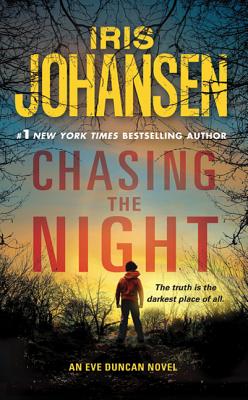 This is book number 11 in the Eve Duncan series.

Bestselling author Iris Johansen creates another thrill ride, with the much anticipated return of Eve Duncan in Chasing the Night.

One woman's nightmare…
A CIA agent's two-year-old child was stolen in the night as a brutal act of vengeance. Nine years later, Catherine Ling's instincts—maternal and professional—tell her that her son is still alive. But she needs the help of someone as driven and obsessed as she is to find him. That person is Eve Duncan.

…is another woman's duty.
Eve has walked the same path as Catherine, having endured the disappearance of her own daughter, Bonnie. Now Eve must raise her game as a forensic sculptor to another level, using the science of age progression to unite mother and son. But as she is drawn deeper into Catherine's horror, she must face looming demons of her own. Whoever took Bonnie is still out there—and until he is brought to justice, and Bonnie is brought home, Eve will be forever CHASING THE NIGHT.

“A story that is literally explosive! ... Johansen's books are so addictive because of her expertise in creating memorable characters faced with life-testing challenges. Pulse-pounding!” —RT Book Reviews on Chasing the Night

“With an imaginative plot and gut-wrenching action…this novel packs a wallop and is impossible to put down.” —Tucson Citizen on Eight Days to Live

“You'll want to keep the lights on while reading!” —Romantic Times BOOKreviews on Blood Game

“Johansen is becoming a master of the macabre and paranormal thriller, and her latest riveting Eve Duncan tale has it all, from ghosts and secret cults to supernatural avengers.” —Booklist on Blood Game

“Readers won't soon forget either the enigmatic hero or the monstrous villain. This one's chilling to the bone!” —Romantic Times BOOKreviews on Deadlock

“Keeping the tension high and the pace relentless, prolific and compelling Johansen adds depth to her popular characters as she continues this suspenseful series.” —Booklist on Quicksand

“An exhilarating thriller…suspense that will keep readers on the edge of their seats.” —Booklist on Pandora's Daughter

“A fast-paced, non-stop, clever plot in which Johansen mixes political intrigue, murder, and suspense.” —USA Today on The Face of Deception

“Thoroughly gripping and with a number of shocking plot twists…packed all the right elements into this latest work: intriguing characters; creepy, crazy villain; a variety of exotic locations.” —New York Post on The Search