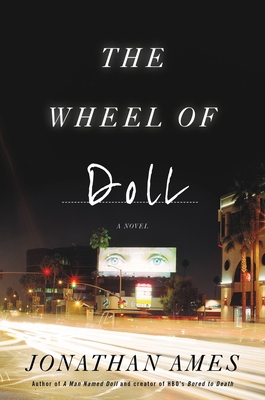 The Wheel of Doll: A Novel (The Doll Series #2) (Hardcover)

This is book number 2 in the The Doll Series series.

In this second installment of a series characterized by "offbeat humor and unflinching violence" (NTYBR), the eponymous and hapless detective Happy Doll returns with a new philosophy and a new case; "Hard-boiled PI fiction set in the present doesn’t get much better." (Publishers Weekly, STARRED)

Although badly scarred and down to his last kidney after the previous caper, Happy Doll is back in business. When a beguiling young woman turns up at his door, it’s Doll’s past that comes knocking. Mary DeAngelo is searching for her estranged mother, Ines Candle—a singular and troubled woman Doll once loved. The last he’d seen her she’d been near-death: arms slit like envelopes. Although she survived the episode, she vanished shortly thereafter. Now, years later, Mary claims Ines is alive and has recently made contact—messaging her on Facebook and calling her from a burner phone—only to disappear once again. Although his psychoanalyst would discourage it, Doll takes the case, desperate to see Ines again. But as the investigation deepens, there are questions he can’t shake. What’s led the flighty Ines to reappear? Is Mary only relaying half the truth? And who is Mary’s strange and mysterious husband?
In this wholly original follow-up to A Man Named Doll, Happy travels through L.A., Washington, Oregon and back again—a journey that gets wilder and woolier with each turn. An irreverent and inventive mystery, The Wheel of Doll is not to be missed.
Jonathan Ames is the author of I Pass Like Night; The Extra Man; What's Not to Love?; My Less Than Secret Life; Wake Up, Sir!; I Love You More Than You Know; The Alcoholic; The Double Life Is Twice as Good, and most recently, You Were Never Really Here (adapted into the acclaimed film starring Joaquin Phoenix). He's the creator of two television series, Blunt Talk and Bored to Death, and has had two amateur boxing matches, fighting as "The Herring Wonder."
“Ames...mixes the hard-boiled thrill of Raymond Chandler with P. G. Wodehouse’s offbeat antics, blending them into a smooth, enthralling read that feels like a new genre... with the turn of a page, Doll shows himself as savage as he is soulful, unblinking when the time comes to crack someone’s skull with his retractable baton. Ames has written a rough renaissance man with a few screws loose, if you will—which makes for one hell of a flagship character.”—Tyler Watamanuk, GQ

“When I reviewed Jonathan Ames’ crime series opener, A Man Named Doll, I said I would follow his protagonist anywhere he went, no matter how strange the trip…In The Wheel of Doll, the ex-cop turned private investigator…travels through the Pacific Northwest and back to Los Angeles, encountering terrain so dark that repeated bodily injury seems like a respite…The journey takes Doll away from his beloved dog George and through the wreckage of his past and present, annihilating his desire for peace and upping his violence threshold to a near-unsustainable level. The repeated betrayals, shot through with a strain of romanticism, make this second Doll as memorable as the first.”—Sarah Weinman, The New York Times Book Review

"The more you follow the protagonist, private investigator Happy Doll (yep, that's his birth name), his new client Mary, and his former flame/missing person Ines, the crazier and darker the events get. I think only Happy's dog George stays out of any trouble. This well-written book reminds me of the iconic film Taxi Driver, where a well-meaning loner tries to help out some unlucky ladies."—Buzzfeed

“Jonathan Ames's second installment of his Happy Doll series does not disappoint. The Wheel of Doll moves at a breakneck pace, with characters that leave a strong impression, whether they make it out alive or not. Not a book for the faint of heart, The Wheel will satisfy neo-noir thrill-seekers (and dog lovers! George!) and literary fiction fans alike.”—P&T Knitwear Bookstore (New York, NY)

“A Great Hard Boiled adventure for Detective Happy Doll. Down on his luck he's thrilled when the daughter of an old flame hires him to go looking for her missing mother. But all is not as it seems. Secrets and lies abound as Happy goes looking for trouble. Violent and lyrical this is my best Fall pick.”—Main Point Books (Wayne, PA)

“Detective Happy Doll is back in business, if a bit worse for wear. When a young woman named Mary DeAngelo knocks on his door one night searching for her estranged mother, Doll realizes her mom is a woman, Ines, he once loved, only to have her vanish. Now Ines has made contact with Mary, only to vanish again. Unable to let sleeping dogs lie, Doll takes the case.”—Mackenzie Dawson, New York Post

"This follow-up to A Man Named Doll brings much of the same uncanny energy—raw violence, hard-boiled humor—with a new dash of pathos, as Doll goes on the search for an old flame he believed dead. Ames, as ever, plays with the full range of hardboiled tropes and brings out fresh nuances and something really quite startling in this contemporary PI novel."—Crime Reads

“Jonathan Ames—no matter how dark or weird or uncomfortably personal the subject—has always been a fun writer to read.”—Lit Hub

“Versatile writer Jonathan Ames (novelist, essayist, screenwriter) offers a contemporary noir with graceful writing and mordant humor…the detective’s sardonic outlook is as important as the plotting, and the comforts of his narrative voice become even more vital as bodies begin to pile up.”—Dan Fesperman, The Washington Post

Praise for A MAN NAMED DOLL

"I loved this book - it's quirky, edgy, charming, funny and serious, all in one. Very highly recommended."—Lee Child, #1 bestselling author of Blue Moon

"While the macabre seriousness of the crimes and the narrator’s good-nature and sardonic humor might seem to be at odds, Ames makes it work through assured plotting, superb local color, and excellent prose. Readers will happily root for Doll, a good detective and a decent human, in this often funny and grisly outing."—Publishers Weekly, Starred

“A MAN NAMED DOLL is so fun and propulsive I didn’t just read it in one sitting, I read it in what felt like a single breath. Happy Doll is a tremendously likable main character, and the Los Angeles he inhabits is vibrantly alive in every detail. I hope Jonathan Ames has many more adventures planned for the newest P.I. in town.”—Lou Berney, author of the New York Times-bestselling November Road

“If Elliott Gould’s Philip Marlowe landed in the middle of Uncut Gems, you’d have something like Jonathan Ames’s A MAN NAMED DOLL, which expertly mines the dark humor, mordant wit and dreamy fatalism of great LA noir. And at its center is a detective with a battered heart and bruised conscience. I’d follow him, and his dog George, anywhere.” Megan Abbott, Edgar Award-winning author of Dare Me

“Readers expecting action won’t be let down, and the sparkling yet unpretentious language gives the whole an extra kick. Recommend to noir fans, action fans, anyone who likes a good read.” Booklist, Starred review