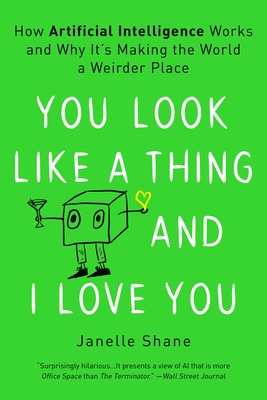 You Look Like a Thing and I Love You: How Artificial Intelligence Works and Why It's Making the World a Weirder Place (Paperback)


Usually Ships in 1-5 Days
“A deft, informative, and often screamingly funny primer on the ways that machine learning can (and often does) go wrong.” —Margaret Harris, Physics World
“You look like a thing and I love you” is one of the best pickup lines ever…according to an artificial intelligence trained by the scientist Janelle Shane, creator of the popular blog AI Weirdness. Shane creates silly AIs that learn how to name colors of paint, create the best recipes, and even flirt (badly) with humans—all to understand the technology that governs so much of our human lives.
We rely on AI every day, trusting it for matters both big and small, from unlocking our phones to hospital care. But how smart is AI really…? Shane delivers the answer to every AI question you’ve ever asked, and some you definitely haven’t—such as: How can a computer design the perfect sandwich? What does robot-generated Harry Potter fan fiction sound like? And is the world’s best Halloween costume really “vampire hog bride”?

In this smart, often hilarious introduction to the most interesting science of our time, Shane shows how these machines learn, fail, and adapt—and how they reflect both the best and worst of humanity.

"I can't think of a better way to learn about artificial intelligence, and I've never had so much fun along the way." —Adam Grant, New York Times bestselling author of Originals
Janelle Shane has a PhD in electrical engineering and a master's in physics. At aiweirdness.com, she writes about artificial intelligence and the amusing and sometimes unsettling ways that algorithms get human things wrong. She has been featured on the main TED stage; in the New York Times, The Atlantic, Wired, Popular Science, and more; and on NPR's All Things Considered, Science Friday, and Marketplace. She was named one of Fast Company’s 100 Most Creative People in Business, and an Adweek Young Influential. She is almost certainly not a robot.