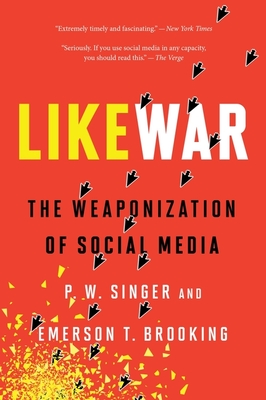 
Usually Ships in 1-5 Days
Two defense experts explore the collision of war, politics, and social media, where the most important battles are now only a click away.

Through the weaponization of social media, the internet is changing war and politics, just as war and politics are changing the internet. Terrorists livestream their attacks, “Twitter wars” produce real-world casualties, and viral misinformation alters not just the result of battles, but the very fate of nations. The result is that war, tech, and politics have blurred into a new kind of battlespace that plays out on our smartphones.

P. W. Singer and Emerson Brooking tackle the mind-bending questions that arise when war goes online and the online world goes to war. They explore how ISIS copies the Instagram tactics of Taylor Swift, a former World of Warcraft addict foils war crimes thousands of miles away, internet trolls shape elections, and China uses a smartphone app to police the thoughts of 1.4 billion citizens. What can be kept secret in a world of networks? Does social media expose the truth or bury it? And what role do ordinary people now play in international conflicts?

Delving into the web’s darkest corners, we meet the unexpected warriors of social media, such as the rapper turned jihadist PR czar and the Russian hipsters who wage unceasing infowars against the West. Finally, looking to the crucial years ahead, LikeWar outlines a radical new paradigm for understanding and defending against the unprecedented threats of our networked world.

P. W. SINGER is an expert on twenty-first-century warfare. His award-winning nonfiction books include the New York Times bestseller Wired for War.

EMERSON T. BROOKING is a Resident Fellow at the Digital Forensic Research Lab of the Atlantic Council. His work has been published in Foreign Affairs, the Atlantic, and Rolling Stone.

An Amazon Best Book of the Month  An Amazon Best Book of the Year (2018) Featured on NPR, CBSn, MSNBC, PBS, and ABC News Radio, as well as in The New York Times, Washington Post, Time, Popular Science, Rolling Stone, Forbes, Atlantic, Wired, Slate, Politico, Gizmodo, Foreign Affairs, Defense One, Vox, The Daily Beast, Adweek, and more   “A compelling read . . . [LikeWar] is not a warning about tomorrow’s war—it’s a map for those who don’t understand how the battlefield has already changed.” —Washington Post  “Seriously. If you use social media in any capacity, you should read this.” —The Verge   “Extremely timely and fascinating.” —The New York Times, New & Noteworthy    “Terrific and alarming . . . Wow.” —SE Cupp, CNN  “Reading LikeWar will help you to avoid being part of this Internet of Idiots . . . While students of history, strategic studies, political science, and international relations will all find LikeWar on their required reading list, anyone else who wishes to understand the world we live in must add LikeWar to the top of the pile on their nightstand.” —Forbes   “Whether it's his fiction and nonfiction, his work as a TRADOC 'mad scientist,' the interviews he's done with defense media, the pages of Popular Science, or some other venue, P.W. Singer is the Army's must-read thinker.” —Army Magazine?   "...an in-depth account...Through a series of engaging profiles the authors, P. W. Singer and E. T. Brooking, explore the new reality and consequences facing each of us as we attempt to interact with the larger world via social media. Well organized with a vernacular easy to follow, Like War seeks to show us the hazards we are already encountering on a daily basis...this is an excellent book for anyone regularly utilizing social media, in particular the modern warfighters seeking a better understanding of information warfare and the terrain in which it is fought." —Journal of the Joint Air Power Competence Center  “Backed by over 100 pages of notes, LikeWar is sober, deeply researched, and still compulsively readable. Comparisons to On War and The Art of War are apt.” —Amazon, Best Book of the Month (Oct)  “'Russia is not the full story," Singer tells Codebook. 'Russia is just a chapter in a larger book.' Singer, a researcher at the New America think tank, means that both figuratively and literally. His and Brooking's book, 'LikeWar: The Weaponization of Social Media,' comes out today. It may be the first study to link Mexican cartels, ISIS and reality TV villain Spencer Pratt.” —Axios   “A fantastic read.” —The LoopCast  “The picture Singer and Booking paint of how social media is being weaponized is compelling, and one that ought to give pause to any practitioner in the field of national security. I am reluctant to be so effusive in my praise, but this is truly a must-read book.” —Lawfare  "...a blueprint on how to think, operate and survive in this operational environment." —Army Magazine   —