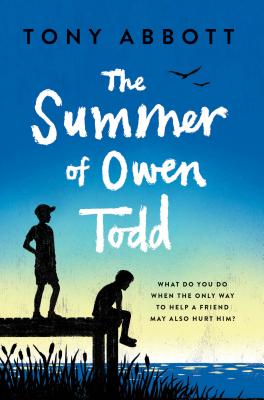 The Summer of Owen Todd (Hardcover)

Owen and his best friend, Sean, are both eleven years old. They’ve lived on Cape Cod all their lives, and now that they’re a little older, they’ll finally be free to spend some time on their own. But Sean’s mother has a different idea—she hires a babysitter to look after Sean. Paul is in his twenties, and a well-liked guy from church.

Paul starts doing things that just feel wrong. Because they’ve always been as close as brothers, Sean tells Owen, and no one else. What’s not certain to Owen is what he should do. Sean warns him not to tell anyone what is happening. But if Owen doesn’t tell, could something even worse happen to Sean?

This harrowing and sensitively told tale of child abuse is a must-read for anyone who might ever be called upon to help a friend in need.

This title has Common Core connections.

Tony Abbott is the award-winning author of more than 80 books for young readers, including Firegirl, The Postcard, and the Secrets of Droon series. He lives in Connecticut with his wife and two daughters.

One of School Library Journal's Best Books of 2017!

"The setting is particularly well drawn, and woven into the story are threads about family, friendship, trust, courage, and growing up. VERDICT Unsettling and at times painful, this book offers an empathetic portrayal of a difficult and important subject." —School Library Journal starred review

"Abbott handles this escalation with care, demonstrating the ways that a predator can isolate and intimidate a victim... A horror story based on reality, believably and sensitively constructed in the voice of the young protagonist." —Kirkus

"It’s a difficult, important, and possibly lifesaving story of children forced into terrible situations, as well as what real loyalty and friendship look like. Wishing books like this weren’t necessary doesn’t make them less so." —Publishers Weekly starred review

"This book tackles the heartbreaking topic of child abuse with both sensitivity and brutal honesty." —VOYA