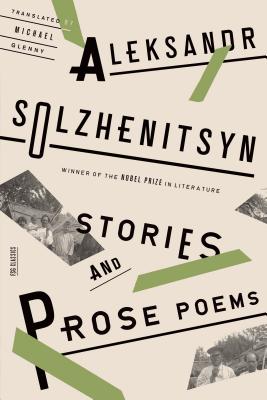 A new edition of the Russian Nobelist's collection of novellas, short stories, and prose poems Stories and Prose Poems collects twenty-two works of wide-ranging style and character from the Nobel Prize–winner Aleksandr Solzhenitsyn, whose shorter pieces showcase the extraordinary mastery of language that places him among the greatest Russian prose writers of the twentieth century.
When the two superb stories "Matryona's House" and "An Incident at Krechetovka Station" were first published in Russia in 1963, the Moscow Literary Gazette, the mouthpiece of the Soviet literary establishment, wrote: "His talent is so individual and so striking that from now on nothing that comes from his pen can fail to excite the liveliest interest." The novella For the Good of the Cause and the short story "Zakhar-the-Pouch" in particular—both published in the Soviet Union before Solzhenitsyn's exile—fearlessly address the deadening stranglehold of Soviet bureaucracy and the scandalous neglect of Russia's cultural heritage.
But readers who best know Solzhenitsyn through his novels will be delighted to discover the astonishing group of sixteen "prose poems." In these works of varying lengths—some as short as an aphorism—Solzhenitsyn distills the joy and bitterness of Russia's fate into language of unrivaled lyrical purity.

Aleksandr Solzhenitsyn, winner of the 1970 Nobel Prize in Literature, was born in 1918. In February 1945, while he was captain of a reconnaissance battery of the Soviet Army, he was arrested and sentenced to an eight-year term in a labor camp and permanent internal exile, which was cut short by Khrushchev's reforms, allowing him to return from Kazakhstan to Central Russia in 1956. Although permitted to publish One Day in the Life of Ivan Denisovich in 1962—which remained his only full-length work to have appeared in his homeland until 1990—Solzhenitsyn was by 1969 expelled from the Writers' Union. The publication in the West of his other novels and, in particular, of The Gulag Archipelago, brought retaliation from the authorities. In 1974, Solzhenitsyn was arrested, stripped of his Soviet citizenship, and forcibly flown to Frankfurt. Solzhenitsyn and his wife and children moved to the United States in 1976. In September 1991, the Soviet government dismissed treason charges against him; Solzhenitsyn returned to Russia in 1994. He died in Moscow in 2008.

Michael Glenny, who died in Moscow in August 1990, was Britain’s foremost translator of modern Russian literature.

“His new collection, with its stoical, plain, inward beauty, movingly reminds us that Solzhenitsyn seems never to have written a line that was not somehow tinged with hope.” —Kirkus Reviews