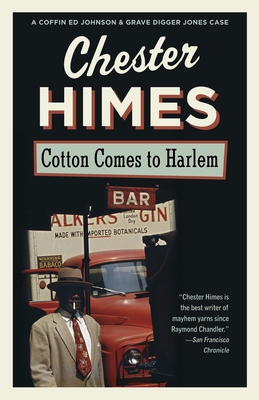 This is book number 7 in the Harlem Detectives Series series.

A classic entry in Chester Himes’s trailblazing Harlem Detectives series, Cotton Comes to Harlem is one of his hardest-hitting and most entertaining thrillers.

Flim-flam man Deke O’Hara is no sooner out of Atlanta’s state penitentiary than he’s back on the streets working the scam of a lifetime. As sponsor of the Back-to-Africa movement, he’s counting on a big Harlem rally to produce a massive collection—for his own private charity. But the take is hijacked by white gunmen and hidden in a bale of cotton that suddenly everyone wants to get his hands on. As NYPD detectives “Coffin Ed” Johnson and “Grave Digger” Jones piece together the complexity of the scheme, we are treated to Himes’s brand of hard-boiled crime fiction at its very best.

Chester Himes was born in Missouri in 1909. He began writing while serving a prison sentence for a jewel theft and published just short of twenty novels before his death in 1984. Among his best-known thrillers are Blind Man with a Pistol, Cotton Comes to Harlem, The Crazy Kill, A Rage in Harlem, The Real Cool Killers, and The Heat's On, all available from Vintage.

“One of the most important American writers of the 20th century. . . . A quirky American genius.”
—Walter Mosley

“Chester Himes is one of the towering figures of the black literary tradition. . . . A master craftsman.”
—Henry Louis Gates, Jr.

“Every one of his beyond-cool Harlem novels is cherished by every reader who finds it.”
—Jonathan Lethem