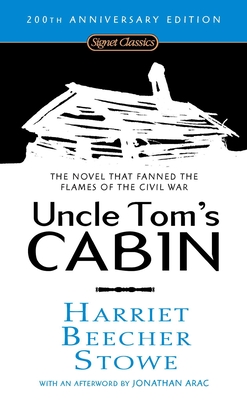 
Usually Ships in 1-5 Days
Harriet Beecher Stowe's timeless and moving novel, an incendiary work that fanned the embers of the struggle between free and slave states into the fire of the Civil War.

Uncle Tom's Cabin is the story of the slave Tom. Devout and loyal, he is sold and sent down south, where he endures brutal treatment at the hands of the degenerate plantation owner Simon Legree. By exposing the extreme cruelties of slavery, Stowe explores society's failures and asks a profound question: “What is it to be a moral human being?” And as the novel that helped to move a nation to battle, Uncle Tom's Cabin is an essential part of the collective experience of the American people.

Harriet Beecher Stowe (1811-1896) was born in Litchfield, Connecticut, daughter of the Reverend Lyman Beecher of the local Congregational Church. In 1832, the family moved to Cincinnati, where Harriet married Calvin Ellis Stowe, a professor at the seminary, in 1836.  The border town of Cincinnati was alive with abolitionist conflict, and there Mrs. Stowe took an active part in community life. She came into contact with fugitive slaves and learned from friends and from personal visits what life was like for the African-American in the South. In 1850, the Fugitive Slave Law was passed, and that same year Harriet's sister-in-law urged the author to put her feelings about the evils of slavery into words. Uncle Tom's Cabin was published serially from 1851 to 1852 in The National Era and as a book in 1852.  More than 300,000 copies of the novel were sold in one year.  Mrs. Stowe continued to write, publishing eleven other novels and numerous articles before her death at the age of eighty-five in Hartford, Connecticut.
“Uncle Tom's Cabin is the most powerful and enduring work of art ever written about American slavery.”—Alfred Kazin