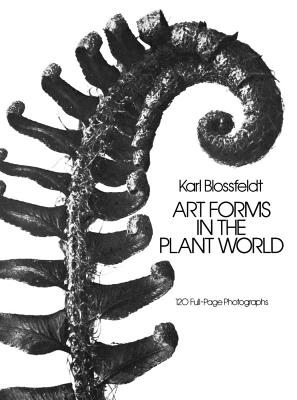 
Usually Ships in 1-5 Days
At first intended as personal reference material in his work as sculptor and teacher, the remarkable nature photographs of Karl Blossfeldt (1865-1932) attained critical acclaim in 1928 when he published Urformen der Kunst (Archetypes of Art). His work influenced and helped to establish modern German photography. While the style of the time was soft-focus, impressionistic photographs, Blossfeldt's purpose governed his photographic method and resulting magnificent prints: direct lighting to define form, sharp focus to expose detail and texture, enlarging up to 27 times actual size to reveal structure that previously was invisible or overlooked by the naked eye.
His subject matter ― the leaves, buds, stems, seed pods, tendrils, and twigs of plant life ― sparkles with an honest simplicity and clarity that discloses not only the wonder and science of nature, but also the distinct similarities between the form developed by nature and that produced by man. In the infinite variety of form in the plant world, Blossfeldt found many examples of shape and structure that, when photographed his way, resemble the forms of man's artistic (particularly architectural) styles ― from Gothic through Art Nouveau. His images imply that man's art mirrors nature and suggest that nature, in its continuous reproduction and adaptation, also creates its own art.
Blossfeldt's exquisite and historically important photographs continue to be prominently exhibited and acclaimed throughout the world. Painstakingly reproduced for this edition, his 120 unretouched plates will delight artists and illustrators, naturalists and philosophers, photographers, and anyone who is intrigued by the beauty, form, and design of nature.