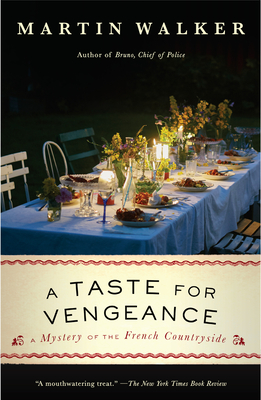 A Taste for Vengeance: A Mystery of the French Countryside (Bruno, Chief of Police Series #11) (Paperback)

This is book number 11 in the Bruno, Chief of Police Series series.

Another delightful installment in the internationally acclaimed series featuring Chief of Police Bruno: When a British tourist fails to turn up for a luxurious cooking vacation in the idyllic village in the south of France that Bruno Courrèges calls home, the chief of police is quickly on the case.

Monika Felder is nowhere to be found, and her husband, a retired British general, is unreachable. Not long after Bruno discovers that Monika was traveling with a mysterious Irishman with a background in intelligence, the two turn up dead. Was she running away? How much does her husband really know? Meanwhile, the star of the girls’ rugby team is pregnant, jeopardizing her chances of being named to the French national squad. Bruno’s search for the truth in both cases leads him in some unexpected directions—but as ever, he and his friends find time along the way to savor the culinary delights of the region.
Martin Walker is a senior fellow of the Global Business Policy Council, a private think tank based in Washington, D.C. He is also editor in chief emeritus and international affairs columnist at United Press International. His previous novels in the Bruno series are Bruno, Chief of Police; The Dark Vineyard; Black Diamond; The Crowded Grave; The Devil’s Cave; The Resistance Man; The Children Return; The Patriarch; Fatal Pursuit; and The Templars’ Last Secret, all international best sellers. He lives in Washington, D.C., and the Dordogne. www.brunochiefofpolice.com
“A mouthwatering treat.” —The New York Times Book Review

“[A] deliciously food-and-wine-soaked world. . . . [And] a cast of characters guaranteed to charm.” —Wine Spectator

“Unashamedly lavished with warmth. . . . The ubiquitous atmosphere of [Walker’s] books is of undisguised affection for the towns, villages, their people, their wine and their food of the Dordogne.” —Forbes