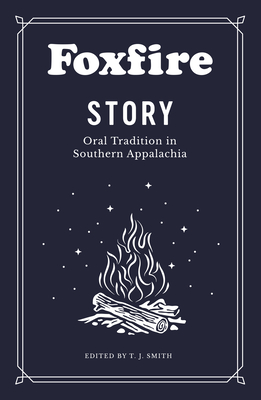 
Usually Ships in 1-5 Days
Since 1972, the Foxfire books have preserved and celebrated the culture of Southern Appalachia for countless readers all around the world. In Foxfire Story, folklorist (and Foxfire director) T.J. Smith collects some of his favorite stories from the archives to illuminate the oral traditions that have been part of the culture of the mountains for centuries.

Here are instances of mountain speech, proverbs and sayings, legends, folktales, anecdotes, songs, and pranks and jests, along with ghost tales and accounts of folk belief, as well as stories from half a dozen of the region’s finest storytellers. Through these examples, Smith examines the role storytelling plays in the Southern Appalachian community, identifying the rich traditions that can be found in the region and exploring how they convey a sense of place—and of identity.
Founded in 1966, FOXFIRE is a nonprofit educational and heritage preservation organization. Foxfire's learner-centered, community-based approach is advocated through The Foxfire Museum and Heritage Center and grounded in the Southern Appalachian culture that promotes a sense of place and appreciation of local people and their traditions as essential educational tools. T.J. SMITH is the president and executive director of The Foxfire Fund, Inc. and holds a Ph.D. in folklore from the University of Louisiana-Lafayette.
"A spirited, entertaining collection of stories and traditions that bear emulating in other regions of the country." —Kirkus Reviews

"Both timeless and curiously of the moment. . . . Folklore and timeworn tips from Southern Appalachian mountain dwellers collected in this latest tome from the beloved Foxfire series." —Garden & Gun