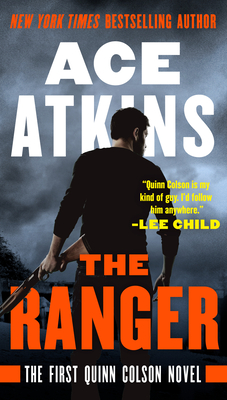 This is book number 1 in the A Quinn Colson Novel series.

In the days that follow, it’s up to Colson to discover the truth, not only about his uncle, but about his family, his friends, his town, and himself. And once it’s discovered, there’s no going back for this real hero of the Deep South.
Ace Atkins is the New York Times bestselling author of the Quinn Colson novels, the first two of which—The Ranger and The Lost Ones—were nominated for the Edgar Award for Best Novel (he also has a third Edgar nomination for his short story, “Last Fair Deal Gone Down”). In addition, he is the author of several New York Times bestselling novels in the continuation of Robert B. Parker’s Spenser series. Before turning to fiction, he was a correspondent for the St. Petersburg Times, a crime reporter for the Tampa Tribune, and, in college, played defensive end for the undefeated Auburn University football team (for which he was featured on the cover of Sports Illustrated). He lives in Oxford, Mississippi.
Praise for The Ranger

“I have always been impressed with (jealous of) how easy Ace Atkins makes it look. The Ranger is by far his best work...I hope Quinn Colson and Lillie Virgil stick around for a good long time.”—Michael Connelly

“Atkins has written a bunch of great thrillers, but this one sets up a series that should push him to the top of the bestseller list.”—John Sandford

“Has the down-and-dirty vibe of a ’70s drive-in action picture.”—Dallas Morning News

“Give this one to Stephen Hunter fans who like fast-moving plots and decisive good guys facing down evil.”—Library Journal

“Atkins kicks off a new series with a solid action packed yarn...Greg Iles fans will find much to like.”—Publishers Weekly