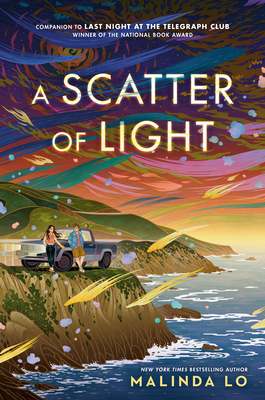 A Scatter of Light (Hardcover)

“Full of yearning, ponderances about art and what it means to be an artist, and self-revelation, A Scatter of Light has a simmering intensity that makes it hard to put down."—NPR

Last Night at the Telegraph Club author Malinda Lo returns to the Bay Area with another masterful queer coming-of-age story, this time set against the backdrop of the first major Supreme Court decisions legalizing gay marriage.

Aria Tang West was looking forward to a summer on Martha’s Vineyard with her best friends—one last round of sand and sun before college. But after a graduation party goes wrong, Aria’s parents exile her to California to stay with her grandmother, artist Joan West. Aria expects boredom, but what she finds is Steph Nichols, her grandmother’s gardener. Soon, Aria is second-guessing who she is and what she wants to be, and a summer that once seemed lost becomes unforgettable—for Aria, her family, and the working-class queer community Steph introduces her to. It’s the kind of summer that changes a life forever.

And almost sixty years after the end of Last Night at the Telegraph Club, A Scatter of Light also offers a glimpse into Lily and Kath’s lives since 1955.
Malinda Lo is the New York Times bestselling author of Last Night at the Telegraph Club, winner of the National Book Award, the Stonewall Book Award, and the Asian/Pacific American Award for Literature, as well as Michael L. Printz and Walter Dean Myers honors. Her debut novel Ash, a Sapphic retelling of Cinderella, was a finalist for the William C. Morris YA Debut Award, the Andre Norton Award for YA Science Fiction and Fantasy, the Mythopoeic Fantasy Award, and the Lambda Literary Award. Malinda’s short fiction and nonfiction has been published by The New York Times, NPR, Autostraddle, The Horn Book, and multiple anthologies. She lives in Massachusetts with her wife and their dog.
An NPR Best Book of the Year
A Parents Magazine Best Book of the Year
A Buzzfeed Best Book of the Year

“Full of yearning, ponderances about art and what it means to be an artist, and self-revelation, A Scatter of Light has a simmering intensity that makes it hard to put down."—NPR

"The intimate details and complex relationships of this perfectly rendered story of first love between two young women is reminiscent of Judy Blume's classic Forever."—Parents Magazine

★ "Aria’s story is...about what it means to be an artist, a friend, a daughter and a granddaughter, and about how identities of all kinds can converge and crystallize as part of the process of growing up."—BookPage, starred review

★ "Tells the powerful story of one young woman's life-changing summer of self-discovery....Both newcomers and longtime fans of Lo's work should enjoy this narrative of a young woman coming to understand herself and her wants better."—Shelf Awareness, starred review

★ "An excellent coming-of-age and coming-out story. Characters are complicated and messy but in a realistic and relatable way. The story is driven by Aria’s truthful narration, which is beautifully reflective of an 18-year-old at that time…. A must-have.”—SLJ

"A Scatter of Light is not one but many love letters—to art, to first crushes, and to friendships that span decades and ground you while letting you grow."—Booklist

"This deeply perceptive bildungsroman thoughtfully explores several absorbing topics, but first and foremost it is an intimate, exhilarating story of first love."—Horn Book

"A Scatter of Light is a book of crashes (and crushes) with effects that reverberate across time. It is queer in the best of ways — messy, raw, heartbreaking, freeing, and imperfect."—Autostraddle

Praise for Last Night at the Telegraph Club, a New York Times Bestseller and Winner of the National Book Award

“Lo's writing is so rich you can practically feel the glow of neon bar lights radiating off the page.”—bestselling author Casey McQusiton for Entertainment Weekly

"This stunning work of historical fiction effectively depicts both the thrills of young queer love and the horrors of racism and the Red Scare."—Boston Globe

"This queer coming-out and coming-of-age story reverberates with dangers, dilemma and a dream deferred."—San Francisco Chronicle

"A joy to read."—The Advocate

"Malinda Lo is an absolute icon."—BuzzFeed