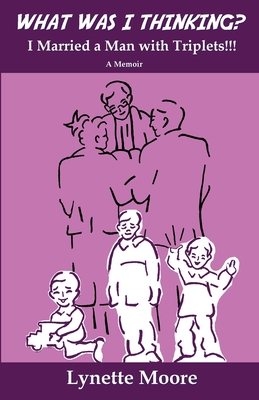 What Was I Thinking? I Married a Man with Triplets!!! (Paperback)

After being married twice and becoming a widow, Lynette, the loneliest woman in a small Texas town, began to search the internet for "Mr. Right." Although she was a single mom with an 8-year-old son and another son in college, she held on to hope that somewhere out there was a good match for her. Like a miracle blessing, "Mr. Right" appeared, but he came with something Lynette wasn't sure she was ready for: 6-year-old triplet sons. Despite her fears, she decided to take a chance and embark on this wild adventure, only to quickly find herself in a world of chaos.

Often times funny, and sometimes heartbreaking, in her memoir Lynette describes the rollercoaster ups and downs of falling in love and marrying a man with triplets. Follow the antics as she desperately tries to be Super Mom, Super Stepmom and a supportive housewife. And then share in her sorrow of struggling with her husband's unexpected terminal illness. While told with heart and humor, she hopes that this story about love, family, patience, loss, and ultimately, faith, will inspire and touch many people.