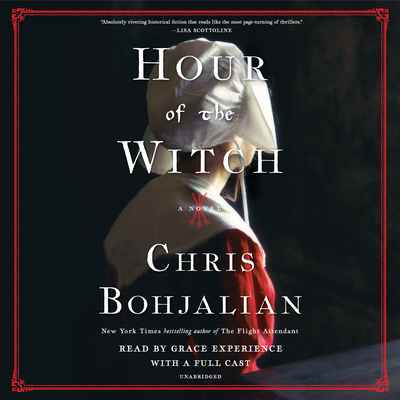 Hour of the Witch: A Novel (CD-Audio)

“Trapped in a marriage with a violent man in Puritan New England, the fierce and resilient Mary Deerfield has the audacity to file for divorce in a time when women are accused of witchcraft for any non-conforming behavior. While historical, this story rings true for today.”
— Lisa Casper, Tattered Cover Colfax, Denver, CO

NEW YORK TIMES BEST SELLER • From the acclaimed author of The Flight Attendant: “Historical fiction at its best…. The book is a thriller in structure, and a real page-turner, the ending both unexpected and satisfying” (Diana Gabaldon, bestselling author of the Outlander series, The Washington Post).

A young Puritan woman—faithful, resourceful, but afraid of the demons that dog her soul—plots her escape from a violent marriage in this riveting and propulsive novel of historical suspense.

Boston, 1662. Mary Deerfield is twenty-four-years-old. Her skin is porcelain, her eyes delft blue, and in England she might have had many suitors. But here in the New World, amid this community of saints, Mary is the second wife of Thomas Deerfield, a man as cruel as he is powerful. When Thomas, prone to drunken rage, drives a three-tined fork into the back of Mary's hand, she resolves that she must divorce him to save her life.

But in a world where every neighbor is watching for signs of the devil, a woman like Mary—a woman who harbors secret desires and finds it difficult to tolerate the brazen hypocrisy of so many men in the colony—soon becomes herself the object of suspicion and rumor. When tainted objects are discovered buried in Mary's garden, when a boy she has treated with herbs and simples dies, and when their servant girl runs screaming in fright from her home, Mary must fight to not only escape her marriage, but also the gallows.

A twisting, tightly plotted novel of historical suspense from one of our greatest storytellers, Hour of the Witch is a timely and terrifying story of socially sanctioned brutality and the original American witch hunt.
CHRIS BOHJALIAN is the #1 New York Times best-selling author of twenty-two books, including The Red Lotus, Midwives, and The Flight Attendant, which is an HBO Max limited series starring Kaley Cuoco. His other books include The Guest Room; Close Your Eyes, Hold Hands; The Sandcastle Girls; Skeletons at the Feast; and The Double Bind. His novels Secrets of Eden, Midwives, and Past the Bleachers were made into movies, and his work has been translated into more than thirty-five languages. He is also a playwright (Wingspan and Midwives). He lives in Vermont and can be found at chrisbohjalian.com or on Facebook, Instagram, Twitter, Litsy, and Goodreads, @chrisbohjalian.
One of the Washington Post’s 50 Notable Works of Fiction of the Year • A Real Simple Best New Book • A Read It Forward Most Anticipated Book • A Lit Hub Most Anticipated Book • A CrimeReads Most Anticipated Book • A GoodReads Most Anticipated Book • An AARP Most Anticipated Book

“Hour of the Witch is historical fiction at its best… Insightful and empathetic… Thick with details as chowder is with clams… Handled with great skill and delicacy. The book is a thriller in structure, and a real page-turner, the ending both unexpected and satisfying.”
—Diana Gabaldon, The Washington Post

"Harrowing... In the hands of a master storyteller like Bohjalian, [Hour of the Witch is] an engrossing tale of a woman who insists upon the right to navigate her life, and the consequences when she does.”
—Danielle Trussoni, New York Times Book Review

"Bohjalian does an admirable job of bringing his numerous players to life in all their complexity... Hour of the Witch—part courtroom thriller, part psychological suspense novel—holds a reader’s rapt attention all the way to its startling conclusion.”
—Tom Nolan, Wall Street Journal

“[A] knotty dilemma lies at the heart of what is, at a deeper level, a novel of psychological suspense. Can one know if one is, indeed, damned?...In Bohjalian’s deft portrayal, Mary chafes at her societal and marital confines...[Shows] how timeless some battles —and some heroines — are.”
—Clea Simon, Boston Globe

"Chris Bohjalian never disappoints... Guaranteed to keep you on the edge of your seat."
—CrimeReads

"A rich and terrifying story... A grab-you-by-the-throat suspense read that both historical fiction fans and thriller lovers will devour.”
—Real Simple

"No. 1 New York Times bestselling author and literary legend Chris Bohjalian returns with a story about Mary Deerfield, a suspected witch in 1662 Boston who, while wrestling with her own internal demons and disastrous marriage, raises suspicion that the demons aren't just in her own mind."
—Zibby Owens, Good Morning America

"Unputdownable... Relying on a large cast of well-developed characters and an intricate plot, Bohjalian skillfully ratchets up the tension all the way through the exceptional ending.”
—Modern Mrs. Darcy

"Bohjalian is excellent at suspense (he also wrote The Flight Attendant) and at lovingly detailed scene setting... But this novel’s true strength is in its portrayal of an abused person’s mind... our of the Witch also raises perceptive questions about how fixed identity really is... Even more, the book asks whether we own our identities and whether we can know ourselves, the way many people have questioned who they are in the upheavals of the last two years."
—Alix Hawley, The Walrus

"Historical fiction fans who also love a good thriller? Here’s a new one for your list.”
—CNN.com

"[Hour of the Witch] is set well in the past, but its witch-accusation drama feels contemporary enough to drive home how far Americans still have to go in dismantling the patriarchy... Flawed but compelling characters are in the author's wheelhouse... Moments of suspense make for gratifying white-knuckled reading, as do several whodunit scenarios.”
—Kristen Ravin, Seven Days

"[Bohjalian] never fail[s] to produce top-notch literary fiction... An unputdownable revenge thriller... A brilliant, intense and extremely satisfying work by a master of literary fiction who just seems to be getting better and better."
—Book Reporter

"A carefully-plotted journey... In addition to spinning the tale of a strong woman in difficult times, Bohjalian’s meticulous research transports readers back to the early years of America and all the work and hardships of daily life.”
—Amanda St. Amand, St. Louis Post-Dispatch

"Hour of the Witch is Bohjalian at his best... When Bohjalian is really cooking, there’s a kinetic energy to his storytelling that is unlike anything else in the realm of popular fiction. He brings a brightness to the page that illuminates the entire narrative, creating a powerful glow... Hour of the Witch is another exceptional offering from Chris Bohjalian, one that features the hallmarks of his best work while also breaking new ground. Vividly realized thanks to solid research and captivating characterization, it’s a book that will likely prove difficult for you to put down."
—The Maine Edge

"Relying on intricate plotting and a large cast of well-developed characters, Bohjalian skillfully ratchets up the tension all the way through the exceptional ending.”
—Modern Mrs. Darcy

"Bohjalian blends historical fiction with a thrilling courtroom drama. . . A fascinating and immersive read... What makes this novel remarkable and compulsively readable is Bohjalian’s uncanny ability to capture the Puritan perspective... Hour of the Witch is at once brilliantly idiosyncratic while also recognizable. This genre-defying thriller is sure to become a staple of book clubs and a favorite of historical mystery fans.”
—BookPage

"No matter the subject, Bohjalian often incorporates thorny moral questions that arise from a story's circumstances, but reach far beyond the boundaries of its time period. Hour of the Witch is smartly wrapped in large ideas, like how women must subversively navigate a society in which they have little power, and what a justice system looks like when yoked to a fervent set of religious beliefs."
—WBUR

"Chris Bohjalian's latest thriller is a nail-biting historical novel about a woman whose quest for a divorce in 1662 Boston might just end with her being branded as a witch. In Hour of the Witch, 24-year-old Mary Deerfield is desperate to escape her violent husband, Thomas. But in the New World, where every woman is under suspicion for being a witch, her desire to escape her marriage may end up sending her to the gallows if she isn't careful."
—Pop Sugar

"Themes of women’s agency in a patriarchal society are common in historical novels, but this fast-moving, darkly suspenseful novel stands out with Bohjalian’s extraordinary world-building skills. . . Will have readers racing toward the ending.”
—Historical Novels Review

"Hour of the Witch is a gripping page-turner, written with beautiful prose and enthrallingly developed characters.”
—Mystery and Suspense Magazine

"Immediately engrossing. . . [Mary Deerfield] is a woman we can root for. . . Bohjalian’s smart stylistic choices ensure that the reader is well and truly transported back to 17th-century Puritan New England, and Hour of the Witch is a finely-wrought and emotionally-charged historical drama."
—Addison Independent

“Absolutely riveting historical fiction that reads like the most pageturning of thrillers, driven by its compelling heroine Mary Deerfield, a young wife who finds the physical and moral courage to stand up for herself in a time when women could be hung as witches... Hour of the Witch is a woman’s story, a romance, a history lesson, and a legal thriller, all of a piece. I haven’t read a novel like it in recent memory, and I doubt that I will for years to come.”
—Lisa Scottoline

"A rich and terrifying story... Hour of the Witch by Chris Bohjalian is a grab-you-by-the-throat suspense read that both historical fiction fans and thriller lovers will devour."
—Real Simple

"A probing page-turner about society's scapegoats and how elusive justice can be.”
—AARP

"Throughout Bohjalian’s prolific career, he has rewarded readers with indelibly drawn female protagonists, and the formidable yet vulnerable Mary Deerfield is a worthy addition to the canon. Conjuring up specters of #MeToo recriminations and social media shaming, there are twenty-first-century parallels to Bohjalian’s atmospheric Puritan milieu, and his trademark extensive research pays off in this authentic portrait of courage in the face of society’s worst impulses. Bohjalian is a perennial favorite, and this Salem Witch Hunt drama has a special magnetism.”
—Booklist, starred

“Bohjalian’s historical novel is full of twists and turns. Though not a typical suspense novel, the story has many of the page-turning plot lines of a thriller, and is sure to keep readers enthralled. Though it’s set in the 1600s, Mary’s story resonates today, as it addresses the role religious and societal expectations can play in the lives of individuals. A must-read and highly recommended.”
—Library Journal

"A twisty thriller set in 17th-century Boston...With its exploration of themes including domestic abuse, toxic masculinity, and mass hysteria, the novel feels like anything but a period piece."
—Publishers Weekly

"Illustrates how rough justice can get when religion and institutional sexism are in the mix."
—Kirkus