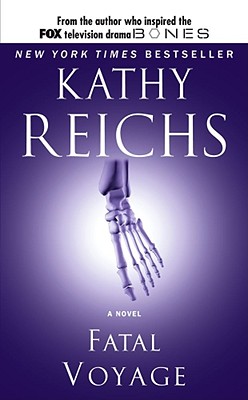 This is book number 4 in the A Temperance Brennan Novel series.

“Buckle up and take this voyage,” says People. The journey begins with Temperance Brennan hearing shocking news on her car radio. An Air TransSouth flight has gone down in the mountains of western North Carolina, taking with it eighty-eight passengers and crew. As a forensic anthropologist and a member of the regional DMORT team, Tempe rushes to the scene to assist in body recovery and identification.

As bomb theories abound, Tempe soon discovers a jarring piece of evidence that raises dangerous questions—and gets her thrown from the DMORT team. Relentless in her pursuit of its significance, Tempe uncovers a shocking, multilayered tale of deceit and depravity as she probes her way into frightening territory—where someone wants her stopped in her tracks.
Kathy Reichs’s first novel Déjà Dead, published in 1997, won the Ellis Award for Best First Novel and was an international bestseller. Cold, Cold Bones is Kathy’s twenty-first entry in her series featuring forensic anthropologist Temperance Brennan.  Kathy was also a producer of Fox Television’s longest running scripted drama, Bones, which was based on her work and her novels. One of very few forensic anthropologists certified by the American Board of Forensic Anthropology, Kathy divides her time between Charlotte, North Carolina, and Montreal, Québec. Visit her at KathyReichs.com or follow her on Twitter @KathyReichs.
"The plot moves with electric force." -- Publishers Weekly

"Buckle up and take this voyage." -- People