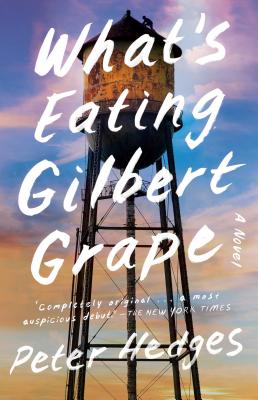 
On Our Shelves Now
Just about everything in Endora, Iowa (pop. 1,091 and dwindling) is eating Gilbert Grape, a twenty-four-year-old grocery clerk who dreams only of leaving. His enormous mother, once the town sweetheart, has been eating nonstop ever since her husband's suicide, and the floor beneath her TV chair is threatening to cave in. Gilbert's long-suffering older sister, Amy, still mourns the death of Elvis, and his knockout younger sister has become hooked on makeup, boys, and Jesus -- in that order. But the biggest event on the horizon for all the Grapes is the eighteenth birthday of Gilbert's younger brother, Arnie, who is a living miracle just for having survived so long. As the Grapes gather in Endora, a mysterious beauty glides through town on a bicycle and rides circles around Gilbert, until he begins to see a new vision of his family and himself....
With this wry portrait of small-town Iowa -- and a young man's life at the crossroads -- Peter Hedges created a classic American novel "charged with sardonic intelligence" (Washington Post Book World).
Peter Hedges, the author of What's Eating Gilbert Grape, grew up in West Des Moines, Iowa.
The Atlantic Sometimes funny, sometimes sad...and always engaging.

Harry Crews What's Eating Gilbert Grape is a story that outruns the covers of the book in which it is contained. Once you read this story, it will be with you forever -- this place amd these people will live in your heart and in the blood it pumps. I am utterly dumbfounded when a first novel of this quality comes along. I send Peter Hedges the ultimate compliment one writer can send another: I'll surely read the next thing you write.

Publishers Weekly Wonderfully entertaining and amusing...goes down like a chocolate milkshake but boasts the sharpness and finesse of a complex wine....Like John Updike, Hedges invests an antihero's ordinary provincial life with theamatic meaning....

The New York Times Hedges' writing possesses a sincerity that directly engages the reader's sympathies. The result is a narrative that is alternately sad, funny and gruesome, a narrative that uses the story of this one unfortunate family to create a portrait of small town life that's frequently as affecting as Sherwood Anderson's Winesburg, Ohio, as disturbing and darkly surreal as Nathanael West's Dream Life of Balso Snell. At once the story of one young man's coming of age, and an elegy for those outsiders and misfits who find themselves sidetracked from the American Dream, What's Eating Gilbert Grape stands as a most auspicious debut.

Philadelphia Inquirer A picture of tragedy painted in humor...Gilbert Grape is one of the breed of male narrators whose sweet, wry, endearing voices invest every failing with humor and every ordinary moment with a measure of worried perplexity bordering on awe....Gilbert's sexuality is subtly and tenderly evoked....[Hedges has fashioned] a world at once vast and finite....

Cedar Rapids Gazette Terrific...wonderfully entertaining...a literary delight....There's a bit of John Updike's Rabbit trilogy in this charming narrative, just as there are traces of Richard Brautigan's In Watermelon Sugar. But mostly there's Peter Hedges, who grabs the reader early on with this tale....The pace of the narrative sweeps the reader along to a most compelling and poignant conclusion....Nuggets pop off the page with regularity and make this story come alive....What's Eating Gilbert Grape has the feel of simplicity, but you know you're reading something complex and artistically crafted. The book has the air of whimsy, but will grab you with fierce credibility. Hedges is a young author to be reckoned with.