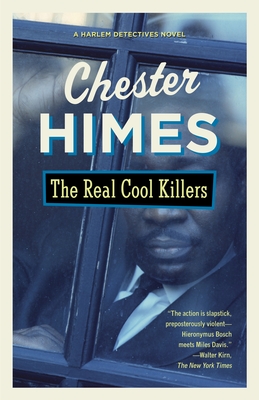 This is book number 2 in the Harlem Detectives Series series.

The book that Walter Kirn said was like “Hieronymus Bosch meets Miles Davis" (The New York Times). • Coffin Ed Johnson and Grave Digger Jones get personally involved in a gang dispute in one of the most provocative cases in Chester Himes’s groundbreaking Harlem Detectives series.

Many people had reasons for killing Ulysses Galen, a big Greek with too much money and too great a liking for young black girls. But there are complications—like Sonny, found standing over the body, high on hash, with a gun in his hand that fires only blanks; a gang called the Moslems; a disappearing suspect; and the fact that Coffin Ed’s daughter is up to her pretty little neck in the whole explosive business.

Chester Himes was born in Missouri in 1909. He began writing while serving a prison sentence for a jewel theft and published just short of twenty novels before his death in 1984. Among his best-known thrillers are Blind Man with a Pistol, Cotton Comes to Harlem, The Crazy Kill, A Rage in Harlem, The Real Cool Killers, and The Heat's On, all available from Vintage.

“One of the most important American writers of the 20th century. . . . A quirky American genius.”
—Walter Mosley

“For sheer toughness it’s hard to beat the black detectives Coffin Ed Johnson and Grave Digger Jones. Himes never received the recognition he deserved for his books—they combine elements of George V. Higgins, Elmore Leonard, and Richard Stark, with a bleak vision all their own.”
—The Washington Post