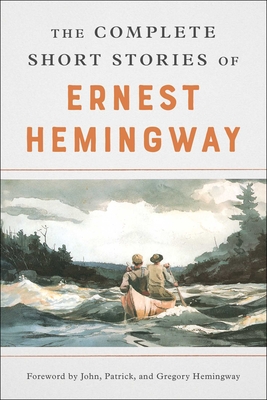 
Usually Ships in 1-5 Days
The complete, authoritative collection of Ernest Hemingway's short fiction, including classic stories like "The Snows of Kilimanjaro," "A Clean, Well-Lighted Place," and "The Short Happy Life of Francis Macomber," along with seven previously unpublished stories.

In this definitive collection of the Nobel Prize-winning author’s short stories, readers will delight in Hemingway’s most beloved classics such as "The Snows of Kilimanjaro," "Hills Like White Elephants," and "A Clean, Well-Lighted Place," and will discover seven new tales published for the first time in this collection, totaling in sixty stories. This collection demonstrates Hemingway’s ability to write beautiful prose for each distinct story, with plots that range from experiences of World War II to beautifully touching moments between a father and son. For Hemingway fans, The Complete Short Stories is an invaluable treasury.
Ernest Hemingway did more to change the style of English prose than any other writer of his time. Publication of The Sun Also Rises and A Farewell to Arms immediately established Hemingway as one of the greatest literary lights of the twentieth century. His classic novel The Old Man and the Sea won the Pulitzer Prize in 1953. Hemingway was awarded the Nobel Prize for Literature in 1954. His life and accomplishments are explored in-depth in the PBS documentary film from Ken Burns and Lynn Novick, Hemingway. Known for his larger-than-life personality and his passions for bullfighting, fishing, and big-game hunting, he died in Ketchum, Idaho on July 2, 1961.