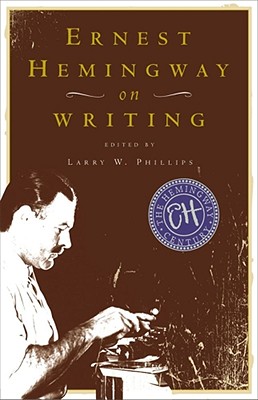 
Usually Ships in 1-5 Days
An assemblage of reflections on the nature of writing and the writer from one the greatest American writers of the twentieth century.

Throughout Hemingway’s career as a writer, he maintained that it was bad luck to talk about writing—that it takes off “whatever butterflies have on their wings and the arrangement of hawk’s feathers if you show it or talk about it.”

Despite this belief, by the end of his life he had done just what he intended not to do. In his novels and stories, in letters to editors, friends, fellow artists, and critics, in interviews and in commissioned articles on the subject, Hemingway wrote often about writing. And he wrote as well and as incisively about the subject as any writer who ever lived…

This book contains Hemingway’s reflections on the nature of the writer and on elements of the writer’s life, including specific and helpful advice to writers on the craft of writing, work habits, and discipline. The Hemingway personality comes through in general wisdom, wit, humor, and insight, and in his insistence on the integrity of the writer and of the profession itself.
—From the Preface by Larry W. Phillips
Ernest Hemingway did more to change the style of English prose than any other writer in the twentieth century, and for his efforts he was awarded the Nobel Prize for literature in 1954. Publication of The Sun Also Rises and A Farewell to Arms immediately established Ernest Hemingway as one of the greatest literary lights of the twentieth century. As part of the expatriate community in 1920s Paris, the former journalist and World War I ambulance driver began a career that led to international fame. He covered the Spanish Civil War, portraying it in fiction in his brilliant novel For Whom the Bell Tolls, and he subsequently covered World War II. His classic novella The Old Man and the Sea won the Pulitzer Prize in 1953. He died in 1961.