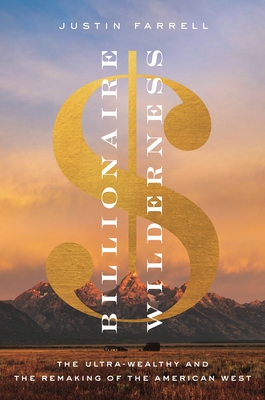 Billionaire Wilderness: The Ultra-Wealthy and the Remaking of the American West (Princeton Studies in Cultural Sociology #83) (Hardcover)

This is book number 83 in the Princeton Studies in Cultural Sociology series.

A revealing look at the intersection of wealth, philanthropy, and conservation

Billionaire Wilderness takes you inside the exclusive world of the ultra-wealthy, showing how today's richest people are using the natural environment to solve the existential dilemmas they face. Justin Farrell spent five years in Teton County, Wyoming, the richest county in the United States, and a community where income inequality is the worst in the nation. He conducted hundreds of in-depth interviews, gaining unprecedented access to tech CEOs, Wall Street financiers, oil magnates, and other prominent figures in business and politics. He also talked with the rural poor who live among the ultra-wealthy and often work for them. The result is a penetrating account of the far-reaching consequences of the massive accrual of wealth, and an eye-opening and sometimes troubling portrait of a changing American West where romanticizing rural poverty and conserving nature can be lucrative--socially as well as financially. Weaving unforgettable storytelling with thought-provoking analysis, Billionaire Wilderness reveals how the ultra-wealthy are buying up the land and leveraging one of the most pristine ecosystems in the world to climb even higher on the socioeconomic ladder. The affluent of Teton County are people burdened by stigmas, guilt, and status anxiety--and they appropriate nature and rural people to create more virtuous and deserving versions of themselves. Incisive and compelling, Billionaire Wilderness reveals the hidden connections between wealth concentration and the environment, two of the most pressing and contentious issues of our time.
Justin Farrell is associate professor of sociology at Yale University in the School of Forestry and Environmental Studies. He is the author of the award-winning book The Battle for Yellowstone: Morality and the Sacred Roots of Environmental Conflict (Princeton). A native of Wyoming, he lives in New Haven and Denver. Website: justinfarrell.org Twitter @J_Farrell