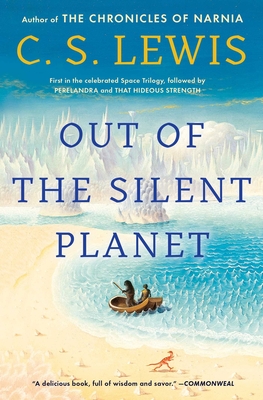 Out of the Silent Planet (The Space Trilogy #1) (Paperback)

This is book number 1 in the The Space Trilogy series.

The first book in C. S. Lewis's acclaimed Space Trilogy, which continues with Perelandra and That Hideous Strength, Out of the Silent Planet begins the adventures of the remarkable Dr. Ransom. Here, that estimable man is abducted by a megalomaniacal physicist and his accomplice and taken via spaceship to the red planet of Malacandra. The two men are in need of a human sacrifice, and Dr. Ransom would seem to fit the bill. Once on the planet, however, Ransom eludes his captors, risking his life and his chances of returning to Earth, becoming a stranger in a land that is enchanting in its difference from Earth and instructive in its similarity. First published in 1943, Out of the Silent Planet remains a mysterious and suspenseful tour de force.
C.S. Lewis was a professor of medieval and Renaissance literature at Oxford and Cambridge universities who wrote more than thirty books in his lifetime, including The Screwtape Letters, The Chronicles of Narnia, and Mere Christianity. He died in 1963.
The New York Times This book has real splendor, compelling moments, and a flowing narrative.

The New Yorker If wit and wisdom, style and scholarship are requisites to passage through the pearly gates, Mr. Lewis will be among the angels.

Los Angeles Times Lewis, perhaps more than any other twentieth-century writer, forced those who listened to him and read his works to come to terms with their own philosophical presuppositions.