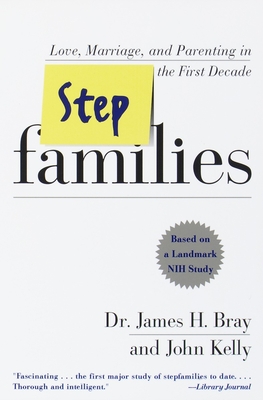 Stepfamilies: Love, Marriage, and Parenting in the First Decade (Paperback)


Special Order
Based on a landmark longitudinal study, the nation's leading expert on stepfamilies reveals his breakthrough findings and offers the first detailed guide to easing the conflicts of stepfamily life and healing the scars of divorce.

There are more than twenty million stepfamilies in America.  For most of them, the simple, daily issues that challenge every family are even more anxiety-provoking.  After conducting a comprehensive nine-year-long study funded by the National Institutes of Health, Dr.  James H.  Bray has written an invaluable book that explains why over half of all stepfamilies fail and reveals the strategies that help the others succeed.

A stepfamily is assaulted on all sides by difficult and often divisive questions.  How much control should a stepparent have over a stepchild? How much authority should a nonresidential parent exert over a child? How should a difficult former spouse be handled? How does an "ours" baby change the emotional dynamic in a stepfamily? Why is there a lack of "honeymoon effect" during the first years of stepfamily life?

Filled with emotional, gripping stories, Bray's findings pinpoint the three major transitions in stepfamily life and identify the riskiest issues that can throw a family into crisis.  Bray is the first to identify the several distinct forms that stepfamilies take and to explore which types of stepfamilies are more vulnerable than others and why.  He also describes the natural life cycle of stepfamilies and basic tasks all stepfamilies must undertake to succeed.  With a wealth of insight into the positive effects of remarriage, Bray shows how a loving, well-functioning stepfamily can lessen the trauma of divorce and restore a child's and family's sense of security.

Most stepparents remarry with the highest hopes and new resolutions for a better life.  Never before have their unique needs been addressed in depth. Through insightful case studies and practical advice, Stepfamilies reveals how a strong, stable stepfamily is as capable as a nuclear family of nurturing healthy development, of imbuing values, of setting limits and boundaries, and of providing a structure in which rules for living a moral and productive life are transmitted, tested, rebelled against, and ultimately affirmed.  Bray's positive message and fascinating findings--many of which defy intuition--will put stepfamilies on the road to lifelong harmony.
James H.  Bray, Ph.D., is a clinical and family psychologist and an associate professor of family medicine at Baylor College of Medicine.  A frequent speaker at national conferences and guest on national television and radio shows, he lives in Houston, Texas.

John Kelly is the coauthor of numerous books on relationships, including Three on the Edge: The Stories of Ordinary American Families in Search of a Medical Miracle and the international bestseller The Secret Life of an Unborn Child.  He lives in New York City.