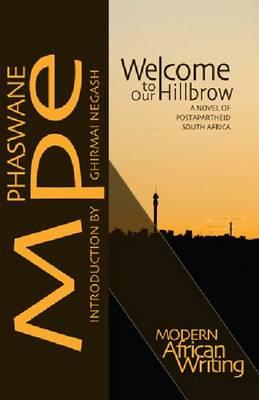 Welcome to Our Hillbrow is an exhilarating and disturbingride through the chaotic and hyper-real zone of Hillbrow—microcosm of all that is contradictory, alluring, and painful in the postapartheid South African psyche. Everythingis there: the shattered dreams of youth, sexuality and its unpredictable costs, AIDS, xenophobia, suicide, the omnipotent violence that often cuts short the promise of young people’s lives, and the Africanist understanding of the life continuum that does not end with death but flows on into an ancestral realm. Infused with the rhythms of the inner-city pulsebeat, this courageous novel is compelling in its honesty and its broad vision, which links Hillbrow, rural Tiragalong, and Oxford. It spills out the guts of Hillbrow—living with the same energy and intimate knowledge with which the Drum writers wrote Sophiatown into being.

Phaswane Mpe taught African literature and publishing studies at the Universityof Witwatersrand. Welcome to Our Hillbrow was his only published novel. He died in 2004.

“Phaswane Mpe (1970–2004) was one of South Africa’s major literary talents who emerged after the fall of apartheid. His intellectual honesty in exploring thematic concerns germane to postapartheid South African society continues to inspire readers who seek to reflect on old and new sets of problems facing the new South Africa. His style continues to set the bar for many aspiring black South African writers. And he is a truly ’home-grown’ South African literary phenomenon.”—From the introduction by Ghirmai Negash

“This book was one of the first looks at what it meant to be young and black and relatively hip in the post-apartheid period. It’s a great book.” —Imraan Coovadia, FiveBooks

“Amid the muddle of the politics, the gripping drama—revealed in fast, tumbling style—centers on friendship, family, betrayal, and love. Fans of Zakes Mda are the perfect audience for Mpe’s similar work.”—Booklist

“In his 2001 novel, Welcome to Our Hillbrow, Mpe captured the dislocation and despair of people who moved in the late ’90s from rural South Africa to Hillbrow, a rough neighborhood in downtown Johannesburg with overcrowded high-rises and a large population of immigrants from elsewhere in Africa. In the South African literary imagination, Hillbrow has come to represent everything frightening and promising about the new South Africa; it is at once a scene of drugs, crime and xenophobia toward immigrants and also what theorists enthusiastically call ‘Afropolitan,’ a space that transcends national boundaries.”—New York Times