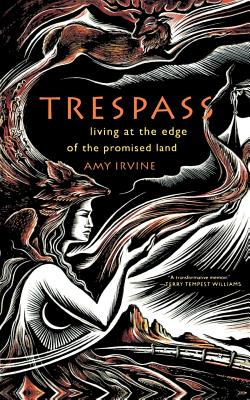 Trespass: Living at the Edge of the Promised Land (Paperback)

Trespass is the story of one woman's struggle to gain footing in inhospitable territory. A wilderness activist and apostate Mormon, Amy Irvine sought respite in the desert outback of southern Utah's red-rock country after her father's suicide, only to find out just how much of an interloper she was among her own people. But more than simply an exploration of personal loss, Trespass is an elegy for a dying world, for the ruin of one of our most beloved and unique desert landscapes and for our vanishing connection to it. Fearing what her father's fate might somehow portend for her, Irvine retreated into the remote recesses of the Colorado Plateau—home not only to the world's most renowned national parks but also to a rugged brand of cowboy Mormonism that stands in defiant contrast to the world at large. Her story is one of ruin and restoration, of learning to live among people who fear the wilderness the way they fear the devil and how that fear fuels an antagonism toward environmental concerns that pervades the region. At the same time, Irvine mourns her own loss of wildness and disconnection from spirituality, while ultimately discovering that the provinces of nature and faith are not as distinct as she once might have believed.

“Fierce . . . The most vivid ground-level report from this war zone that I have ever read.” —Grace Litchtenstein, The Washington Post

“Bold and original in her thinking, candid and lyrical in expression, Irvine launches a penetrating critique of Mormon sovereignty, the persistent oppression of women, the longing to belong versus the need to be one's self, and the environmental havoc wrought by cattle ranching, ‘extreme recreationists' and the federally sanctioned, post-9/11 rush to extract fossil fuels from protected public lands . . . [She] joins red-rock heroes Edward Abbey and Terry Tempest Williams in breaking ranks and speaking up for the living world.” —Booklist (starred review)

“A distinctive, affecting meditation on loss--an amalgam of personal history, natural history, and a search for spirituality . . . in unexpected places.” —More