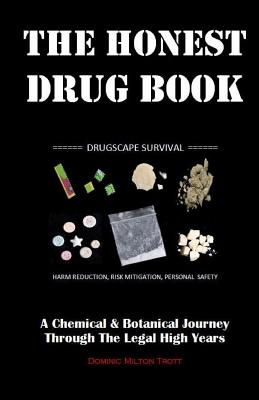 
Usually Ships in 1-5 Days
In 2019 The Honest Drug Book was expanded to include 17 further chemicals and botanicals, and significantly more support content, under the new title of The Drug Users Bible. However, this original version remains available not only to provide an open chronology of its development and as an item for collectors, but also, for anyone who has concerns about purchasing a book with the new title (which could be viewed by some as self-incriminating). You can view The Drug Users Bible, via the author page below, by searching Amazon, or by linking through to its page (www. amazon.com/dp/099559368X).

THE HONEST DRUG BOOK
The Honest Drug Book presents the hidden truth about a topic which touches the lives of almost everyone. It cuts through the blustering rhetoric of the war on drugs, and documents the facts about the subject in general, and about the individual drugs specifically.

This is a journey through 140 psychoactives, both chemical and botanical, each of which was personally tested and used by the author. For every drug, it lists the fundamental and sometimes life-critical information, including the anticipated onset, the common threshold doses, and the expected period of efficacy.

It also describes the subjective experience: what the drug was actually like at each stage of the duration. These 'trip reports' are vital, as they help to identify pitfalls and specific risks for each substance. Often, this is achieved in a humorous and anecdotal manner, which is occasionally accentuated by the fact that the author had to travel the world to undertake the experiments lawfully.

In addition to these often rich and lengthy reports, the book is crammed with data and general information, inclusive of legal briefings, relative harm tables, addiction and overdose advice, detailed reference material, and even a drug dictionary.

Of critical importance is the first section, as it introduces the basics of harm reduction, in the form of a 10 step procedure to help mitigate risk. The same section explains core safety issues, such as how to test and identify a drug, and how to properly establish a dose.

The book itself is lavishly illustrated with hundreds of photographs, including of the drugs themselves. The images in the botanical section also encompass some of the indigenous settings encountered on the journey.

The scope also extends beyond the most common categories of hallucinogens, stimulants, depressants, cannabinoids and opioids. Included, for example, are nootropics (smart drugs) and oneirogenics (lucid and vivid dream herbs).

Emphasised and underpinned throughout is personal safety and risk mitigation. This is the first and last message, and guides the entire narrative.

This is a book that won't only fascinate and inform: it will save lives.

Dominic Milton Trott, author and explorer, has travelled the world to investigate psychoactive botanicals and indigenous cultures. He currently lives in the North-West of England.