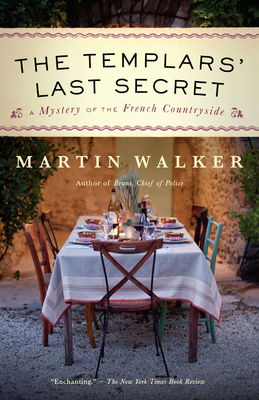 The Templars' Last Secret: A Mystery of the French Countryside (Bruno, Chief of Police Series #10) (Paperback)

This is book number 10 in the Bruno, Chief of Police Series series.

In this installment in the delightful, internationally acclaimed series Chief of Police Bruno works to connect the tangled threads of past and present. He nonetheless finds time, naturellement, to enjoy the wine, food, and beauty of the Périgord region.

When a woman’s body is found at the foot of a cliff near the idyllic French town of St. Denis, chief of police Bruno Courrèges suspects a connection to the great ruin that stands above: a long-ago Knights Templar stronghold.

With the help of Amélie, a young newcomer to the Dordogne, Bruno learns that the dead woman was an archaeologist searching for a religious artifact of incredible importance. And her ties to Islamic terrorists—not to mention the return of an old flame of Bruno’s, who is assigned to work with him on the case—only heightens the pressure to unravel the centuries-old mystery.
Martin Walker is a senior fellow of the Global Business Policy Council, a private think tank based in Washington, D.C. He is also editor in chief emeritus and international affairs columnist at United Press International. His previous novels in the Bruno series are Bruno, Chief of Police; The Dark Vineyard; Black Diamond; The Crowded Grave; The Devil’s Cave; The Resistance Man; The Children Return; The Patriarch; and Fatal Pursuit, all international best sellers. He lives in Washington, D.C., and the Dordogne. www.brunochiefofpolice.com
“Enchanting.” —The New York Times Book Review

“Rich in atmosphere and personality, with characters bound by the tenacious strictures of history and memory. And almost without fail, everything stops for lunch. It’s impossible to read a Bruno novel without getting hungry and thirsty.” —The New York Times

“Fast-moving, totally engaging. . . . The joy of Mr. Walker’s Bruno series is the way the reader becomes immersed into [a] little-known corner of the world.” —Pittsburgh Post-Gazette

“The Templars’ Last Secret brings back [the] immensely appealing, sharp-witted Inspector Bruno. . . . Walker likes to mix rural France’s pleasures with surprising themes. . . . [But] none of this negates Bruno’s daily life—including his inability to resist good food.” —The Seattle Times

“Another feast for mystery and food lovers. . . . Walker’s Bruno, chief of police, mysteries are like the ideal European vacation: loaded with inspiring sights, good companions, and memorable meals (and there’s murder, too!). Spend time with Bruno, his dog, horses, friends, and farmhouse in the tiny village of St. Denis in the Périgord region of rural France, and you feel as if your own life has been enhanced. . . . [The Templars’ Last Secret] features a complicated but enjoyable plot, a rich knowledge of archaeology, and the reliable pleasures of Bruno’s region, including scenery, Bergerac wine, and knockout dining.” —Booklist (starred review)

“The ubiquitous atmosphere of the books is of undisguised affection for the towns, villages, their people, their wine and their food. . . . Its procurement, preparation and joyful consumption, is never more than a few pages away.” —Forbes

“Of all the police inspectors in all the precincts around the world, Bruno, chief of police of tiny St. Denis, France, is the one I would most like to hang out with. . . . It’s not often that a village police chief must match wits with Israel’s Mossad as well as splinter groups of radical Islamic terrorists. Still, Bruno takes it in stride—as he does everything, with a mixture of bumbling and panache, scarcely missing a beat.” —Bruce Tierney, BookPage

“A simmering stewpot of intrigue.” —The Fresno Bee