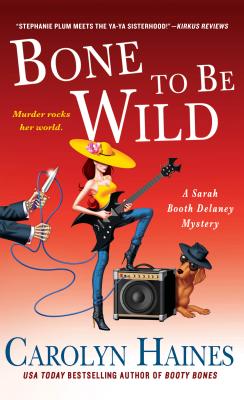 This is book number 15 in the A Sarah Booth Delaney Mystery series.

Sarah Booth Delaney is heartbroken: her fiancé Graf Milieu has decided to move to Hollywood for good, leaving their relationship dead on the vine. Sarah Booth has a perfect distraction, however, in the form of a party her best friends are throwing: the Black and Orange Halloween ball in New Orleans. She plans to dance the night away to the swinging tunes of her old flame Scott Hampton’s blues band. But just as the party gets going, Scott receives a mysterious message that threatens his life and the lives of his bandmates.


“[Haines] delivers a riveting love story alongside the mystery, leaving her readers in hot anticipation of her next novel.”—Mississippi Magazine

Sarah Booth knows that a new case is just what she needs to take her mind off her failed relationship with Graf, and she jumps in to help Scott investigate. But what began as a threat turns into a reality when the bartender from Scott’s club is gunned down in a drive-by. Now, with the help of Sheriff Coleman Peters and her friends from Zinnia, Mississippi, Sarah Booth must put a stop to a killer who’s bound to strike again.

“If you enjoy mysteries with rich Southern settings, fascinating history, and quirky characters, you'll devour this one quicker than a plate full of buttermilk biscuits.” —Mystery Scene Magazine on Smarty Bones

“We have to admit being hooked by the title, but even urbane Tom Wolfe would get a kick out of this delightfully fun 12th installment of Haines' Southern mystery series.” —New York Post on Bonefire of the Vanities