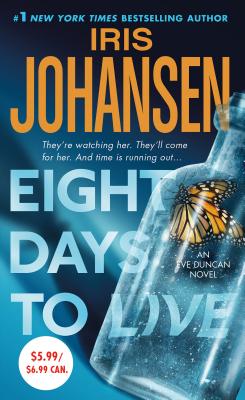 This is book number 10 in the Eve Duncan series.

"Number-one "New York Times "bestselling author Iris Johansen delivers a thriller that will chill you to the core: Eve Duncan's adopted daughter Jane has been targeted by a mysterious cult who has decided that she has only eight days to live "
""
""Eve Duncan and her adopted daughter, Jane Macguire, are pitted against the members of a secretive cult who have targeted Jane and have decided that she will be their ultimate sacrifice. In eight days they will come for her. In eight days, what Jane fears the most will become a reality. In eight days, she will die. It all begins with a painting that Jane, an artist, displays in her Parisian gallery. The painting is called "Guilt" and Jane has no idea how or why she painted the portrait of the chilling face. But the members of a cult that dates back to the time of Christ believe that Jane's blasphemy means she must die. But first, she will lead them to an ancient treasure whose value is beyond price. This elusive treasure, and Jane's death, are all that they need for their power to come to ultimate fruition. With Eve's help, can Jane escape before the clock stops ticking?

Iris Johansen is the New York Times bestselling author of Chasing the Night, Blood Game, and Eve, among others. She began writing after her children left home for college, and first achieved success in the early 1980s writing category romances. In 1991, she began writing suspense historical romance novels, and in 1996 she turned to crime fiction, with which she has had great success. She lives near Atlanta, Georgia.