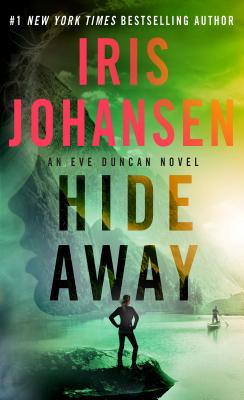 This is book number 20 in the Eve Duncan series.

A New York Times bestseller, Hide Away is an explosive Eve Duncan novel from Iris Johansen

Forensic sculptor Eve Duncan lies in a well-guarded hospital room in Carmel, California. But she and Joe Quinn have sworn to protect an innocent young girl, Cara Delaney, whose enemies are getting closer by the hour. Weighing her own health against Cara’s safety, Eve decides they must disappear—and so she turns to her daughter, Jane MacGuire, for an unexpected solution.

After years of resistance, Jane has finally succumbed to the inevitable: John MacDuff’s insistent plea to track down a treasure presumed buried in Scotland. The remote mountains should be a perfect hiding place for Eve and Cara, but they soon realize there is nowhere distant enough from the ruthless predators who are on their trail. Greed and power war with honor and justice in this thrill-ride from the incomparable Iris Johansen.

“This first-rate novel of romantic suspense will please Johansen’s many fans and newcomers alike.” –Publishers Weekly (starred review) on Hide Away

“Johansen brings a gentleness to her tough-as-nails heroine that will invigorate and intrigue loyal fans of this long-running series.” –Booklist on Hide Away

“Eve Duncan novels by Johansen are so good that, supernatural or not, readers and fans remain completely engaged.” –Suspense Magazine on Shadow Play