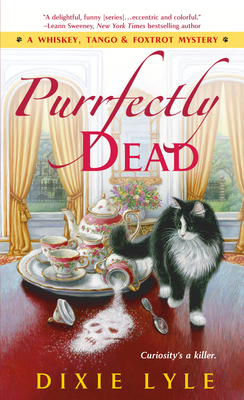 This is book number 5 in the A Whiskey Tango Foxtrot Mystery series.

When zillionairess Zelda Zoransky throws a party, she means business. Assistant extraordinaire, Deidre “Foxtrot” Lancaster knows she’s in for a night when anything can—and will—happen. The evening’s festivities include a high-stakes game between two escape artists locked in a bitter rivalry.

The magic turns tragic when one of the escape artists ends up dead. This is no disappearing act—it’s murder. The suspects include a scientist with a 3D printer, a psychedelically-impaired rock star, and a serpent-tongued ghost with ties to the Garden of Eden. Now it’s up to Foxtrot, Tango, and Whiskey to figure out which guest committed the crime before they reach they end of this deadly game of Clue. How will this tail end?

“A clever new series that deftly blends cozy mystery with the paranormal…original and witty.”—Ali Brandon, author of the Black Cat Bookshop mysteries

Dixie Lyle, author of A Taste Fur Murder and To Die Fur from the Whiskey, Tango and Foxtrot Mysteries from St. Martin's Books, loves animals, mysteries, books, reading, words, bad puns (are there any other kind?) and once had a torrid summer romance with an entire library. Did I mention the books? Oh, and definitely doesn’t believe in the supernatural. Nope, not me. Hey, what was that sound? Where’s that spooky green glow coming from? Oh, hello, didn’t see you standing there in the corner, what with you being all see-through and everything. Want a cup of tea? Moan once for yes, twice for no.

Allegations that Dixie Lyle has a goofy sense of humor are entirely unfounded, and should be forwarded to the unfounded and unlost department.