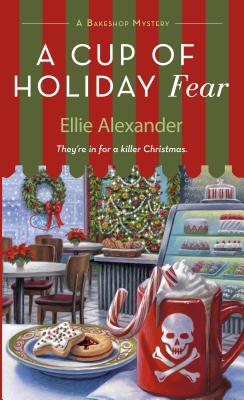 A Cup of Holiday Fear: A Bakeshop Mystery (Mass Market)

This is book number 10 in the A Bakeshop Mystery series.

It’s Christmastime and everyone is heading to Torte, the most cheerful bakery in town. There’s no place like home for the homicide…

Ashland, Oregon, looks as pretty as a postcard this holiday season. The halls are decked, stockings hung, and eyes are all aglow—mostly thanks to the buttered rum. Jules Capshaw and her staff at Torte are busier than ever. . . still, even the town’s most in-demand bakers need to take a break. So Jules invites everyone to celebrate at the local Winchester Inn’s Dickens Feast, a six-course extravaganza with Yorkshire Pudding, Christmas goose, and all the trimmings. But as the weather outside becomes frightful, things inside turn less delightful when one of the guests ends up as dead as Scrooge’s doornail. Now it’s up to Jules and her helpers to make a list of suspects—and check it twice—to try to find out who’s naughty, who’s nice, and who’s guilty of murder…

"Framed by the warmth of the holiday season with a beautifully described setting in southwestern Oregon's Siskiyou Mountains, this satisfying cozy is populated with numerous, sometimes quirky, characters, and includes details of running a baking business, along with an endearing portrait of family relationships and the importance of friendship." - Booklist

"Murder plays second fiddle to a foodie's delight and a paean to awesome Ashland." - Kirkus

"Alexander folds both tantalizing clues and her trademark mouthwatering recipes into this tasty whodunit that's perfect for the holiday season." - The Oregonian

"If you love cozy mysteries, tasty baked goods, or Christmas stories, then you definitely need to add this to you To-Be-Read list!" - Brookfrolic