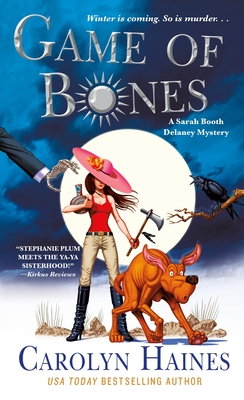 This is book number 20 in the A Sarah Booth Delaney Mystery series.

The next charming mystery from Carolyn Haines is Game of Bones, featuring spunky southern private investigator Sarah Booth Delaney. Will her latest case leave Sarah barking at the moon?

When a ritually murdered corpse is discovered at a Native American temple site smack in the middle of Sunflower County, Mississippi, the archeology crew on the dig is immediately under suspicion—with particular focus on its easy-on-the-eyes, charismatic leader, Dr. Frank Hafner. So when Sheriff Coleman Peters closes in on him, Hafner hires the Delaney Detective Agency to clear his name.

“Appealing…distinctive…atmospheric…Fans and newcomers alike will be satisfied.”
—Publishers Weekly

Rumors swirl around the Mound Salla burial mound, where more dead bodies are turning up. Sarah Booth and her partner, Tinkie, have too many likely suspects to whittle down the list. It’s a race against time once Sarah Booth’s resident ghost, Jitty—in the guise of various Native American warrior women—points to the waxing of the coming Crow Moon as the time of maximum danger. As history and mystery cloak the site, Sarah Booth isn’t sure what to believe, or whom. Can she dig up the truth before she herself ends up six feet under?

"Distinctive characters and an atmospheric setting elevate this paranormal cozy. Series fans and newcomers alike will be satisfied."—Publishers Weekly