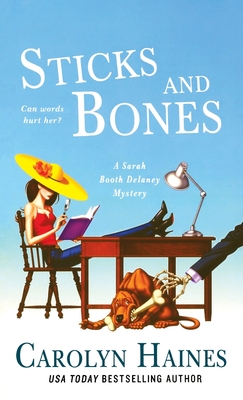 This is book number 17 in the A Sarah Booth Delaney Mystery series.

Private investigator Sarah Booth Delaney and her friends are celebrating New Year’s Eve at the party of the year, a smashing Winter Garden party at the Prince Albert Hotel. It’s a dazzling success…until Frangelica “Sister” McFee walks through the door. Sarah Booth knew Sister in college, before Sister became a bestselling author and moved to New York, and fame and fortune don’t seem to have tempered her arrogance and cruelty.

Sister’s latest book is a memoir about the death of her mother and brother many years ago. Now, a film about the book is in the works, and a film crew has descended upon Zinnia, Mississippi, to tell the complete tale. The film crew soon realizes there may be more to the story than meets the eye—or is told in Sister’s memoir—and they hire Sarah Booth to discover the absolute truth about those deaths so many years ago. But Sarah Booth quickly realizes that someone is desperate to keep the truth hidden and will go to any lengths necessary to protect a long-held secret.

Carolyn Haines's next Sarah Booth Delaney novel, Sticks and Bones, is sure to delight series fans and newcomers alike.

“Haines shows Sarah at her madcap best back in her hometown in this clever adventure. This is a crazy cozy with a little something for everyone: paranormal doings, plenty of Evanovich zaniness, and a cast of eccentrics.”—Booklist on Bone to be Wild

“[Haines] delivers a riveting love story alongside the mystery, leaving her readers in hot anticipation of her next novel.”—Mississippi Magazine on Booty Bones

“Delightful…[a] satisfying beignet of a mystery.”—Publishers Weekly on Booty Bones

“If you enjoy mysteries with rich Southern settings, fascinating history, and quirky characters, you’ll devour this one quicker than a plate full of buttermilk biscuits.”—Mystery Scene Magazine on Smarty Bones