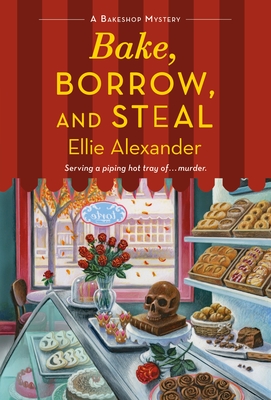 This is book number 14 in the A Bakeshop Mystery series.

Ellie Alexander's Bake, Borrow, and Steal, the most delicious installment yet in the Bakeshop Series set in Ashland, Oregon!

As the autumnal hues of November fall over the Shakespearean hamlet of Ashland, Oregon, Jules and her team at Torte are working on their biggest event ever. They’ve been invited to create chocolate showpieces for the gala opening of a new exhibit, Shakespeare’s Lost Pages at SOMA. The museum, located on the campus of Southern Oregon University, is getting ready to unveil the Bard’s lost manuscript, Double Falsehood, which is being touted as the greatest artistic discovery of modern times. In addition to molding luscious, silky chocolate into magnificent structures, Torte will be serving an authentic Elizabethan feast straight from the pages of a sixteenth century cookbook featuring Lardy cakes, Frangipane tarts, and jellies with chestnut cream.

Jules has underestimated the amount of work required to pull off such a culinary feat. She finds herself in the strange position of feeling frazzled and stressed as the day of the gala approaches. However, her team rallies around her and once the massive works of chocolate art are safely installed at the museum, she can finally let out a sigh of relief and revel in the excitement of the grand celebration. But her relief is short-lived. Right before the unveiling, news quickly begins to spread that Shakespeare’s lost manuscript is missing. Not only that, but the security guard tasked with keeping the priceless artifact safe has been killed. Is this a case of a heist gone terribly wrong? Or could it be that a killer is lurking in the museum archives?