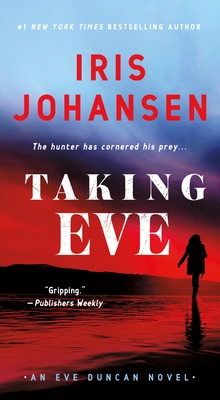 This is book number 16 in the Eve Duncan series.

"Filled with intriguing twists and characters and an overarching mystery that will keep fans coming back."—Kirkus Reviews

In this New York Times bestselling thriller from Iris Johansen, Doane needs Eve's skills and he'll do anything to get them…even if it means Taking Eve.

As a forensic sculptor, Eve Duncan's mission is to bring closure to the families whose loved ones have vanished. She knows their anguish—her own beloved daughter, Bonnie, was taken from her when Bonnie was just seven years old. It is only recently that this mystery was resolved and Eve could begin her journey to peace.

Now Jim Doane wants the same kind of answers that Eve always longed for. His twenty-five-year-old son may or may not be dead, and he has only burned skull fragments as possible evidence. But he cannot go to the police for answers without exposing his dark past, so instead he chooses a bold step to find the truth—one that takes Eve down a twisted path of madness and evil and into the darkest heart of her own history.

“The suspense and action will entertain all, even those new to the series.” —Library Journal (starred) on Eve

“Johansen's intense storytelling style drags readers into a whirlpool of danger and treachery that can have horrifying results. It's awesome!” —RT Book Reviews on Quinn

“A stunning conclusion to a very popular trilogy.” —Booklist on Bonnie