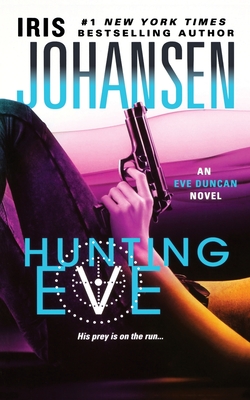 This is book number 17 in the Eve Duncan series.

Hunting Eve is the next New York Times bestseller in Iris Johansen's pulse-pounding series that Kirkus Reviews calls "filled with intriguing twists and characters and an overarching mystery that will keep fans coming back."

She was taken for a reason. Chosen for her skills as a forensic sculptor. Abducted by the deranged father of a serial killer and forced to reconstruct his dead son's skull from bone fragments. Now Eve Duncan has escaped her captor—and she's running for her life. Alone. Unarmed.

In the mountains of Colorado, Eve must use all of her strength, courage, and wits to survive this madman's obsession. But Jim Doane is not the only player in the game. While Joe Quinn, Jane MacGuire, and Kendra Michaels search for Eve in the abandoned mining town that could be her ultimate refuge—or her grave—a stranger with ties to her long-ago past is closing in, circling like a wolf, and HUNTING EVE.