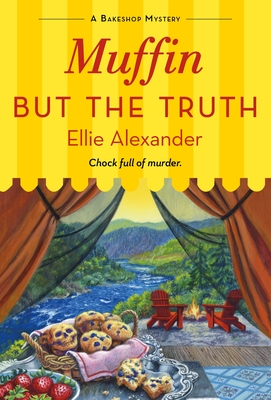 Muffin But the Truth: A Bakeshop Mystery (Mass Market)

This is book number 16 in the A Bakeshop Mystery series.

In Muffin But the Truth, Torte's pastry chef and amateur sleuth Juliet Capshaw finds herself in deep water... in another delicious installment in the Bakeshop Series from author Ellie Alexander, set in Ashland, Oregon!

Ashland is known for its Elizabethan charm and touches of Shakespeare around every corner, but the surrounding Rogue Valley draws adventure enthusiasts to its outdoor wonderland of high alpine lakes, mountain ranges, and pristine rivers. Jules Capshaw and the team at Torte have been hired to cater a weekend getaway on the mighty Rogue River. Jules is going to have to put her culinary skills to the test while baking gooey chocolate chip skillet cookies over an open flame and preparing extravagant feasts under a canopy of stars. The executive team at a big city firm will be rafting the Rogue’s rapids and gathering around the campfire for spooky stories, but their dysfunction quickly begins to show. Between constant bickering and heavy drinking, Jules wonders how the team can accomplish anything. She’s happy for a brief reprieve when they zip up their lifejackets and head out in their boats, but the serenity of the scene quickly vanishes when Jules discovers one of the execs floating face down in the water. She’s going to have to uncover the truth before she gets pulled under.