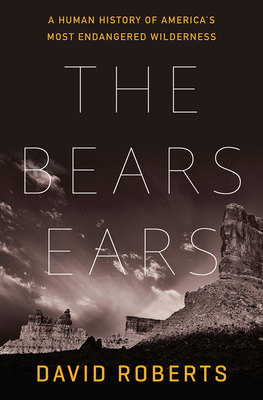 The Bears Ears: A Human History of America's Most Endangered Wilderness (Hardcover)

One of Smithsonian Magazine's Ten Best Travel Books of 2021

A personal and historical exploration of the Bears Ears country and the fight to save a national monument.

The Bears Ears National Monument in southeastern Utah, created by President Obama in 2016 and eviscerated by the Trump administration in 2017, contains more archaeological sites than any other region in the United States. It’s also a spectacularly beautiful landscape, a mosaic of sandstone canyons and bold mesas and buttes. This wilderness, now threatened by oil and gas drilling, unrestricted grazing, and invasion by Jeep and ATV, is at the center of the greatest environmental battle in America since the damming of the Colorado River to create Lake Powell in the 1950s.

In The Bears Ears, acclaimed adventure writer David Roberts takes readers on a tour of his favorite place on earth as he unfolds the rich and contradictory human history of the 1.35 million acres of the Bears Ears domain. Weaving personal memoir with archival research, Roberts sings the praises of the outback he’s explored for the last twenty-five years.

David Roberts (1943–2021) is the author of thirty books on mountaineering, exploration, and anthropology. His books have won the Boardman Tasker Award for Mountain Literature and the Grand Prize at the Banff Mountain Book Competition.
David Roberts has long been one of our most thoughtful and adventurous scribes of the American outback and, with The Bears Ears, he’s written a love song, bold and stirring and plangent, to what just might be our continent’s most spellbinding wilderness.

— Hampton Sides, author of Blood and Thunder and In the Kingdom of Ice

The Bears Ears is a book as evocative and fascinating as the land it describes. For most of his life, David Roberts has been exploring the magical landscape surrounding the Bears Ears in Utah. He’s gathered his experiences and knowledge into this eloquent book, creating an elegiac portrait of the most threatened wilderness in America. This is a must-read for anyone who treasures the red-rock landscapes of Utah and the many extraordinary ruins hidden there. I highly, highly recommend this book!

— Douglas Preston, #1 best-selling author of The Lost City of the Monkey God

A fascinating account of the human history of the Bears Ears, a remote wilderness in the southeastern corner of Utah. This book is a paean from David Roberts to the Bears Ears country, his ‘favorite place on earth.’ His stories will win you to his wilderness—even from your armchair.
— Stephen Lekson, professor of anthropology, University of Colorado, Boulder

David Roberts weaves together history, archaeology, and his personal experiences to reveal the fabric of Bears Ears National Monument. Stories dwell in every canyon and alcove, and Roberts reads this majestic landscape with the practiced eye of a skilled guide. If you want to know the histories embedded in this highly contested monument, this is a must-read.
— Matthew Liebmann, Peabody Professor of American Archaeology and Ethnology, Harvard University

A masterfully rendered portrait of Bears Ears as an endangered land worth celebrating and protecting.
— Publishers Weekly

Roberts’ latest combines research, journalism, and memoir in a satisfying whole that will please fans of his earlier books of both travel in wild places and key moments in Native American history. [It is] at the top of the half-dozen books recently published on Bears Ears and a pleasure for travelers in the Southwest.
— Kirkus