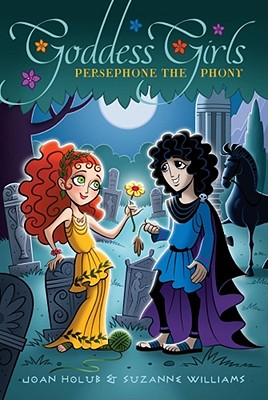 This is book number 2 in the Goddess Girls series.

Persephone learns that it’s ok to stand up for herself in the second book in the Goddess Girls series!

Persephone usually goes along with whatever everyone else wants instead of doing what makes her happy. So when she meets Mount Olympus Academy bad-boy Hades, she finally feels like she has found someone with whom she can be herself. But her mom (Ceres) and her friends don’t exactly approve. If Hades can make her feel so special, is he really that bad, or just misunderstood?
Joan Holub has authored and/or illustrated over 140 children’s books, including the Goddess Girls series, the Heroes in Training series, the New York Times bestselling picture book Mighty Dads (illustrated by James Dean), and Little Red Writing (illustrated by Melissa Sweet). She lives in North Carolina and is online at JoanHolub.com.

Suzanne Williams is a former elementary school librarian and the author of over seventy books for children, including the award-winning picture books Library Lil (illustrated by Steven Kellogg) and My Dog Never Says Please (illustrated by Tedd Arnold), and several chapter book and middle grade series. She also coauthors the Goddess Girls and Thunder Girls series with the fantastic Joan Holub. Visit her at Suzanne-Williams.com.
On top of Mount Olympus, the authors intertwine an enchanting mythological world with middle-school woes compounded by life as a deity or blessed mortal. The books should be popular with fans of girly, light fantasy. -- School Library Journal